How's this for a couple of days of bullshit?

A day before the Saints played the Falcons on December 7th, the NFL’s Arthur Blank-led compensation committee finally rewarded Roger Goodell with a $200M contract extension.

Goodell’s contract came after months of bad blood and threats of litigation from Jerry Jones, who had obstructed the formalities. Blank eventually won this power struggle between two of the NFL’s most influential owners, and delivered Goodell his new contract.

On Thursday the 7th, the Saints played the Falcons and Goodell’s lackeys were lined up in support of Blank's Falcons.

The pregame festivities were highlighted by some good, old-fashioned institutional cheerleading by ESPN—"A Few Good Men: Why the Atlanta Falcons are the NFL team America needs right now.”

The Saints were playing in Atlanta, their fifth Thursday night road game in six seasons, a scheduling peculiarity that seemed less indicative of randomness and more reflective of intent.


Crazy that in the @seanpayton era the @nfl has given the Saints only one midseason Thursday game at home.
— Nick Underhill (@nick_underhill) December 8, 2017


The Saints lost 20-17 in one of the more maddening games the Payton-era Saints have played. The Falcons covered the spread by a half-point.

During the game, the Saints were penalized eleven times for eighty-seven yards (the Falcons four for thirty-five). Sheldon Rankins, of note, was flagged for a phantom roughing-the-passer penalty on a failed third down, which soon thereafter resulted in a Falcons touchdown, a sequence that significantly impacted the game.


That flag took 3 points from the Saints, and the phantom roughing the passer gave the Falcons their lone TD. That's a 10 point swing in a 10-10 game. Massive involvement by the officials tonight.
— Warren Sharp (@SharpFootball) December 8, 2017


This was a particularly-awful call from what I deem an officiating crew favorable to the home team, a nod perhaps from Goodell to Blank for his months-long, steadfast support during contract negotiations.

An officiating crew, it turned out, staffed by a former Falcons player who wasn’t a regular member of this crew, but assigned to work the game nonetheless.

An officiating crew that awarded the Falcons nine first downs via penalty, the highest total in the NFL in twenty years.

It got a little bit worse too …

Toward the end of the game, while the Falcons were running out the clock, Sean Payton tried desperately to call a timeout and preserve the few seconds remaining. When referees didn’t acknowledge his overtures, Payton ran on to the field to get their attention. For this, the officiating crew penalized Payton and assessed the Saints a ten-second run-off of the clock which ended the game.


Sean Payton was trying to get a timeout for 8 seconds, the ref didn't give it to him and then flagged him for getting mad about it. Unreal.
— nick wright (@getnickwright) December 8, 2017


The resulting mess was a one-sided officiating job that drew the ire of Saints fans and Sean Payton alike.


Sean Payton still upset with the refs from yesterday: "I thought the officiating was extremely poor. Inconsistent would be a great way to put it, and I thought that had a lot to do with the way this game ended."
— Josh Katzenstein (@jkatzenstein) December 8, 2017


The day after the game, the NFL announced Payton was facing discipline for his actions towards the officiating crew. Then, because this wasn’t all infuriating enough, we got another little knife twist on Sunday morning when Jay Glazer reported that the NFL recently hired Mike Cerullo.

Cerullo, of course, was the NFL’s purported source of and key witness during Bountygate. During Bountygate, legal testimony revealed Cerullo as an unreliable employee, a disgruntled former coach, and a liar—including his admission that key parts of his Bountygate testimony were “inaccurate.”

And yet, five years after helping the NFL craft its grand and spectacularly-unjust Bountygate PR campaign, Cerullo landed a job in the league office. Because of course.

Same as it ever was.

Now the league department that employs Cerullo will determine how Sean Payton is disciplined as a result of the Falcons game, the cherry on top of the festering pile of bullshit heaped upon the Saints and their fans this week.

How’d Payton react to the news?

Now we await the disciplinary ruling.

The next truckload of bullshit may not be far behind.

The Saints have won four consecutive games after starting 0-2. 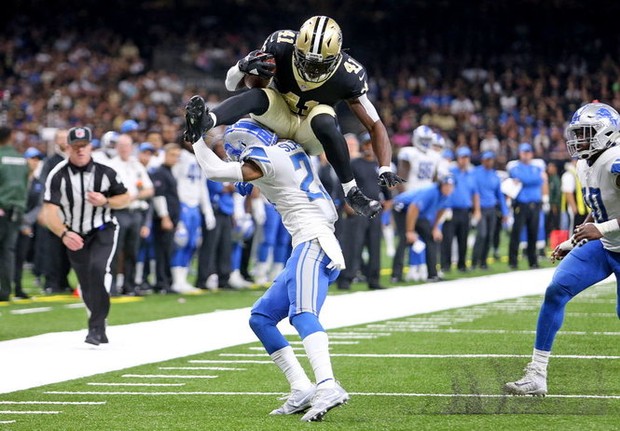 They've won all four by 9+ points, something they've only accomplished in 1987 and 2009 when they fielded two of the best teams in franchise history.

During their four-game winning streak, the defense has surrendered an average of 13.5 points, turned the ball over 10 times, recorded 14 sacks, scored three touchdowns, and batted down 16--SIXTEEN!--passes against Matt Stafford alone.

In two weeks--since before kickoff of the Lions game--the Saints' odds to win the NFC have dwindled from 25:1 to what will probably be 9:1 after this week's games end.

The Saints have won with an ascending defense and dynamic running game, an idea so foreign to the Payton-era Saints that you might question whether you're lost in a fever dream induced by 50 straight games of utterly hopeless defense.

But just in the nick of time, sometime during the first drive against the Panthers in week three, the Saints turned it around. Since then, they've quickly leapfrogged to the top of the NFC South and positioned themselves as contenders for the NFC crown.

So how'd this happen?

First, they nailed the 2017 draft. As a result, the Saints are not weak at any position, and are really good in several spots.

They landed the steal of the draft in Marshon Lattimore, a shutdown cornerback, something the Saints have probably never had. Lattimore’s presence has transformed the defense from the porous unit we've watched for three seasons into a formidable group bounding with confidence. 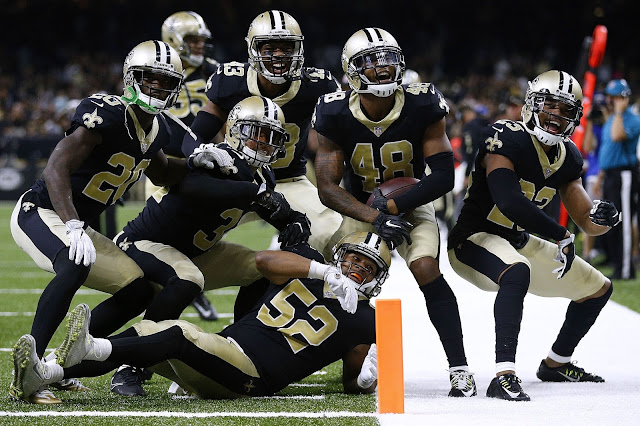 On the defensive line, Cam Jordan has grown into one of, if not the, best defensive ends in the league. In his seventh season, Jordan has built himself into a fierce edge rusher, elite run defender, inspiring leader, and all-around likable guy.

Anchoring an improved special teams is the NFL's best kicking tandem in Thomas Morstead and Will Lutz. And on offense ...

Trading up for Alvin Kamara was a stroke of genius, giving the Saints a fearsome, dual-headed rushing attack, but more importantly giving Sean Payton the hollow point that makes his offensive machine truly deadly, as illustrated during the preseason over at the incomparable Black and Gold Review.

The offensive line, an injury to Larry Warford notwithstanding, is one of the league's best.

And of course, there is the great Drew Brees, a guy who, at age 38, hasn't defied the odds as much as he's relentlessly pursued greatness, carrying the franchise and fanbase along for the ride.

He's cemented himself as one of the greatest quarterbacks in NFL history, and will before too long own every major passing record. In 2017, Brees remains one of the NFL's best quarterbacks, and is poised to again show that he's one of the league's best postseason performers.

When you look at the 2017 Saints absent the context of 2014-2016, it isn’t difficult to see why the Saints are the NFC's best team. They are a young, confident, talented group led by an all-timer at quarterback and a Super Bowl-winning coach. The calculus here isn't all that complex.

The oddsmakers might not be fully on board yet, but give them a few weeks. They won’t be far behind.

The most promising aspect of this team is that they're just scratching the surface of their potential. Last week, Brees said as much. With a team this young--and remember, the Saints are fielding the NFL's youngest defense since 1991--the already-impressive 2017 Saints stand to improve by the week.

That's great news for Saints fans, and bad news for the rest of the NFC.

Back in 2011, there was something special about the Saints. It was more than just the talent. It's as hard to pin down and articulate now as it was then, but there was a deep-rooted belief and aura that infused the team with a sense of unwavering confidence.

After six games in 2017, I’m starting to get that same feeling.

It's time to settle in and relax.

We are in for one hell of a fun ride.

Do You Even Lift, Breaux?

A few weeks before the 2017 season starts, the Saints have shown us a few things.

Michael Thomas is on the verge of greatness. The backup centers can't snap the ball. Will Lutz is going all Great Dane with it. The Ingram-Peterson-Kamara crew looks fun as hell, if not downright daunting. Tommylee Lewis might just render the Brandin Cooks' departure moot. Ted Ginn still can't catch. Marcus Williams looks every bit the ballhawk the Saints have long been without.

And then there are the injuries. Significant injuries.

First it was Max Unger. Then it was Armstead. Then Fairley. Now Delvin Breaux.

Breaux's injury has been particularly instructive, a window into a franchise being held together by Drew Brees and a roll of duct tape.


The Saints mangled, in every conceivable way, Breaux's recovery from a broken leg in 2016, subsequent diagnosis during the 2017 preseason, and hastened return to the field. It has been quite the spectacle to ogle, something the Payton-era Saints have done artfully over the years.

After Breaux’s diagnosis by the Saints’ medical staff (a contusion), Saints' coaches urged Breaux to play through the pain in his leg, something Breaux attempted, then smartly chose not to do further. When Breaux rebuffed his coaches and decided not to practice, what did the Saints do?

Did they think that perhaps Breaux had been misdiagnosed? Nah. Did they consider that rather than needing to be prodded, Breaux needed medical attention? Of course not.

Instead, like a Fat Elvis lounge act whose bag of tricks emptied long ago, they pathetically leaked a trade rumor to the media in a delusional attempt to "motivate" Breaux. As fucking if. Almost beside the point, but equally moronic, was the idea that any team with a modicum of lucidity would trade for an injured player.

Yet this was the plan the Saints settled on.

And how'd that work out?

Two days after leaking the trade rumor, the Saints announced that Breaux's "contusion" was in fact a *fracture* requiring surgery. Surgery, mind you, on the SAME FUCKING LEG Breaux had a plate inserted into last year.

Next the team fired two of its orthopedists. Plenty of us howled with laughter at the continued fuckery on display in the Saints organization. I mean ...

Other than Drew Brees, if there's one guy on the roster who deserves the benefit of the doubt when it comes to toughness, it is Delvin Breaux who, after a damn-near catastrophic neck injury in high school and a grueling, meandering path back to relevance as a football player, established himself as a legitimate NFL cornerback and pride of the local community.

Do you think, maybe, just fucking maybe, this isn't a guy with a propensity to dog it?

Don't blame the medical staff for a mistake. Blame the Saints' leadership for failing to envision a scenario other than Delvin Breaux half-assing it.

In a post-Bountygate era filled with dumbassery from top to bottom--the Greenbriers, the Stanley Jean Baptistes, the Junior Galettes, the Rob Ryans, the Jairus Byrds, the CJ Spillers, the Brandon Browners and on and on and on like that--this episode delivered more of the same.

It showed just how overwhelmed the Saints' front office is, and one wonders how hopeless this franchise would be without the great Drew Brees.

I sure as hell am. Just watch what you wish for.