As it turns out, getting back to the Super Bowl isn't quite so easy.

Now five seasons removed from their greatest moment, the Saints, older and wiser in ways, younger and more promising in others, approach 2014 with the residue of a championship increasingly faint, the present challenges perhaps greater, the fleeting nature of opportunity threatening, yet the hope of a new day once again beaming in the distance.

Navigating their way back to the Super Bowl has been a circuitous, and at times torturous, route for these Saints. They've been turned away and denied repeatedly, by Seattle, San Francisco, Commissioner Goodell, and Seattle again.

Perhaps the fifth try will be the proverbial charm.

Over the course of eight seasons since Sean Payton arrived, including the asterisked one, the Saints have relied on a unique resiliency to make their mark.

In 2006, it was an unexpected ascension to the franchise's first NFC Championship Game after the tumult of Katrina and wholesale renovation of the team. Three seasons later, the Saints unleashed a torrent of fire on the NFL in winning their first 13 games, shrugged off a three-game losing streak, and then historically dispatched three Hall-of-Fame quarterbacks in the postseason en route to their first Lombardi trophy.

From that point forward, it's been a process of reconstruction for the franchise.

The Saints' resiliency has continued to be tested in ways unforeseen: that crushing postseason defeat, Bountygate, interim-interim coaches, the Spagnuolo disaster, and an aging roster among other factors.

After being reinstated in early 2013 from a season-long exile, Sean Payton, wasting time no more, immediately fired Steve Spagnuolo, hired Rob Ryan, and set out to fix the team's Achilles heel: its defense.

A bit more than a year later, and Payton has accomplished that particular task.

Rob Ryan and his marauding band of pillaging Huns have helped the Saints transition into a new era against newly-competitive foes, reformulating the team's identity, re-energizing the fanbase, and--most importantly--setting the table for a championship run in 2014 after a highly-promising beta test last season.

The Saints' defense is on the precipice of busting the "window" wide open or, better yet, opening for the franchise a completely new window from which to dream.

Building on the newfound strength of their defense, the Saints targeted and signed Jairus Byrd as their priority free agent this offseason. At the time of Byrd's signing, Mickey Loomis handed Byrd the NFL's largest-ever contract for a safety, making a mockery of the notion that the supposed "cash-strapped" Saints would stand pat this offseason.

Loomis, of course, continues to do what smart businessmen have done throughout the history of enterprise: anticipate.

Understanding that the salary cap isn't so restrictive as it's set to continue ballooning in the coming years, facile at restructuring contracts to fit the team's current needs, and realizing that available cap space on a championship contender is the most foolish of gold, Loomis did again what he does best: he improved his team with a thundering stroke of mastery while the pretenders gawked with exasperation and dismay. 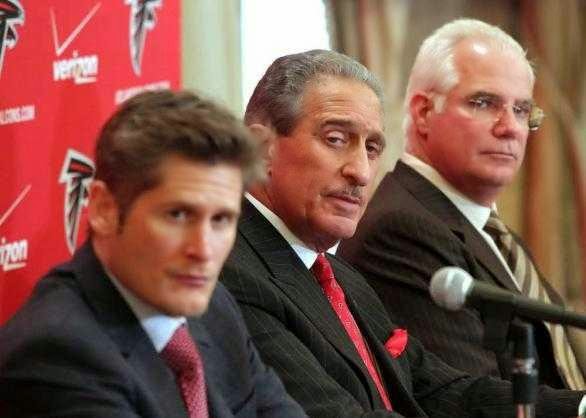 Listed by some as the #1 free agent available in 2014, Jairus Byrd brings to the Saints hawkish range at free safety as one of the NFL's best takeaway artists. As it stands, Byrd is set to become the Darren Sproles to Malcolm Jenkins' Reggie Bush.

Byrd's signing was made all the more enjoyable because:

1.) The Falcons had pursued Byrd as their "big target in free agency" and whiffed in favor of the Saints, forgetting that top-level players who toil away in obscurity for years aren't keen on rebooting their careers with perennial also-rans. Well, except for Tony Gonzalez, I guess.

2.) buffoonish Falcons' fans celebrating like they orchestrated some third-rate coup when the Falcons signed Saints' safety Rafael Bush to an offer sheet as a restricted free agent. Of course, as always, #LoomisMath prevailed, the Saints matched the Falcons' offer, and Bush remained a Saint. Predictably, immense Falcons' butthurt ensued.

Just prior to that, the Saints signed Roland "Champ" Bailey to fortify the cornerback position. Before muddling though injuries in 2013, Bailey produced a stellar 2012 campaign that saw him make second-team All-Pro. A future Hall of Famer, Bailey possesses not only a worthy skill set, but he also offers a veteran presence that will replace, on an otherwise youthful defense, the longstanding leadership of the now-departed Jonathan Vilma, Jabari Greer, Will Smith, and Roman Harper.

With Bailey in the fold, the Saints now mirror on defense the valuable leadership credentials they boast on offense with Drew Brees.

As if all that wasn't enough, the Saints went out and used four of their six draft picks on defense: a cornerback with massive upside (think Akiem Hicks or Jimmy Graham), two linebackers, and a safety.

If you doubted the Saints were assembling a second championship run on the strength of their defense, may your skepticism now be revisited.

That's not, though, to minimize the importance of the offense in 2014.

However you prefer to frame it, and as good as the Saints' offense is, it's undeniable that they labored in 2013 like they rarely have since 2006. In weeks 11-16, the crucial six-game stretch of the team's schedule, the Saints averaged 17.8 points per game. For context, over the course of the entire season, that would have ranked the Saints 30th of 32 teams.

Aside from the offense's poorly-timed struggles during that stretch, Drew Brees performed wildly differently in home and road games. Brees' touchdown/interception ratio at home was an absurd 27/3; away from the Dome, it tumbled--precipitously--to 12/9.

In the Superdome, Brees' passer rating was an outstanding 126.3. On the road, it fell to a pedestrian 84.8. The 41.5 differential represented a significant 30%+ swing in efficiency, a deficit the Saints struggled to overcome in going 3-5 on the road (a road record, mind you, that ultimately prevented the Saints from securing the ever-essential homefield advantage for the postseason).

Combine those factors with the Saints' periodic troubles producing points down the stretch, and it represented an area that demanded attention.

A 5'10 crate of dynamite, Cooks scored 18 touchdowns in his last season at Oregon State, led the nation in receiving yards, returned punts, and ran the fastest 40-yard dash of any wide receiver in this year's draft class.

Unsurprisingly the Saints traded up seven spots to draft Cooks in the first round, a player who compares favorably to both Steve Smith and Randall Cobb. More importantly, Cooks provides an element sorely lacking from the Saints' offense in 2013: a player capable of flipping the field, or scoring from anywhere, with the slightest of openings.

Cooks should pay immediate dividends and, alongside Kenny Stills, inject some additional youth into (what was last year) an aging wide receiving unit.


“For me, it’ll be that he’s the gold standard of receivers going forward. He was the most complete football player that I’ve ever been around. For there to ever be another one to have all the things that he had … I couldn’t even imagine."


“The entire field is open to this guy. Courage is not a problem.”


Combined with Stills' presence as a downfield threat, Cooks will undoubtedly force opposing defenses to utilize what Bill Belichick calls the G.T.F.B. defense: "get the fuck back."

As a result, this should loosen up the middle of the field where Jimmy Graham dominates, an area Dr. Wang has analyzed and labeled "The Smooth Up In Your Jimmy Zone™."

Regardless, Brandin Cooks is set to play an immediate role in the Saints' offense, presumably inheriting a portion of Darren Sproles' touches and meanwhile looming as a legitimate Desean Jackson-esque downfield terror.

Not since Reggie Bush in 2006, or the raw Jimmy Graham in 2010, have the Saints drafted an offensive player with such potential who fits so seemingly perfect into the offense.

He is really competitive. I mean, really competitive ... He's always going the extra mile in everything he does. He'll be an immediate pro. He'll always be on time, and they'll never have any trouble with him ...

Everyone in New Orleans is really going to like him once he gets down there. He's just one of the guys and that's what makes him so special because for us he was kind of a superstar, but he never carried himself that way."

The Saints' two key transactions this offseason were: 1.) signing an All Pro-level safety to produce turnovers, an area the Saints' defense struggled with last year; 2.) drafting this year's fastest, most productive wide receiver to kickstart the heart of the offense.

If you're judging the offseason by the addressing of major needs, then the Saints' moves rate as a surefire success.

Now the long march back to the Super Bowl continues.

The current Saints' roster appears to be the most talent-rich group ever assembled in New Orleans.

From a defensive line and secondary that both rate among the league's very best, to multiple future Hall of Famers, to three All-Pros on offense, to the Saints' all-time leader in every meaningful receiving category, to the excellent Thomas Morstead, to emerging talents like Kenny Stills, Khiry Robinson, and Brandin Cooks, the 2014 Saints are undeniably loaded.

I can't wait to find out.