The Stench of Lies

The trend of the Saints coming up short in big road games continued.

Moreso than ever, Monday night confirmed an already-entrenched truth no matter how distasteful it is.


By my count, this was the worst performance submitted by a Payton-led Saints' team. It's not even close, really.

If there was any parallel to Saints' games of the recent past, it's to the fourth quarter of the 2006 NFC Championship Game in Chicago. Then, an overmatched Saints' team eventually collapsed under the crushing weight of the moment and the elements.

Since that defeat in Chicago, losses under Payton have been largely defined by sloppy, frustrating, avoidable circumstances.

This "loss profile" under Payton has been maddening because the Saints, in spite of the lapses, have still hung around to play competitively deep into most of the games they've eventually lost.

On Monday in Seattle, though, the Saints were annihilated.

It was shocking and demoralizing, probably because nothing like that has happened in a very long time.

For years, as fans, we've been on the favorable side of these kind of beatdowns. You know all the games I'm talking about.

Unfortunately and inevitably, it was our turn to watch the tragedy unfold from the other side.

Don't get me wrong. It's been a lot of fun. But it has been odd. And in Seattle, the season took a turn for its most confounding.

Are the Seahawks that superior this season? Are the Saints that ill-equipped away from home? Or was Monday night just an exercise in extremes?

For the majority of the season, the Saints relied on consistent defense in winning nine of their first eleven games. That this has been central to the Saints' success is strange enough, considering the horror show of 2012 and the less-than-exemplary defenses during Payton's run.

But the compounding impact of an offense perhaps at its weakest under Payton has made 2013 all the more bizarre.

After watching the Saints ring up record numbers against Dallas a month ago, it would be easy to dismiss the notion of a struggling Saints' offense. To do that, though, would be disingenuous considering the offense's performances week by week.

On the whole this year, this has been an offense defined less by lethality and more by pragmatism. This is a decided shift from years' past.

Sean Payton has oft repeated a Parcells' mantra this season: "It doesn't have to be aesthetically-pleasing to be effective." Payton has adopted this as philosophy, without question.

In the past, it seems, the offense has been more prone to dictate how defenses play them by attacking them in a variety of ways. This season it feels like they're more passive and content, only taking what's given.

Maybe I'm just talking out of my ass here, but that's what it seems like to me.

This also might be a function of an offense in transition, one too reliant on parts that need upgrading.

The image I keep coming back to, when I think about the Saints' offense, is one of an aging prizefighter struggling to recapture the form of his once dominant past.

On Monday in Seattle, the Saints' offense generated fewer than 200 yards and scored just one measly touchdown. There's no context needed to understand the helplessness of those numbers.

In the biggest game of the Saints' season, Payton's offense came up the smallest it ever has.

Considering this season in total, it's tough to solely attribute the offensive shortcomings in Seattle to aberration. Perhaps most revealing was that the Saints (on offense) were as healthy as they've been all year, riding a three-game winning streak, and coming off of ten days of rest.

If Monday night was supposed to clarify where the Saints stand this season, it didn't do that.

It might have affirmed Seattle as the NFL's best, but it left the Saints' reality a bit more muddied.

Sunday night against Carolina, though, should go a long way in clearing a suddenly foggy mirror.

Are the Saints more average than they are great? Or was that an impostor's performance in Seattle?

But wait, there's some good news too!

The season isn't over! The Saints have the second-best record in the conference! A playoff berth is nearly clinched! The Saints still have the inside track for the #2 seed in the NFC! Crazy shit happens in the playoffs every year! Flawed teams win the Super Bowl all the time!

For all we know, we're just getting started here.

A primetime game in the Superdome is on tap.

... cried to the southern wind
heading for a showdown ...

Guess who's coming to town?

You guessed it! Another team that sports a pastel in their uniforms! MODERN AND STYLISH!

Their coach, Ron Rivera, looks confused a lot of the time:

Cam Newton's douchebag coefficient (thanks for the metric, Larold!) is off the charts:

Steve Smith, an insane person, will probably start a fight with the Saints' Gatorade cooler at some point (deep down, I kinda love Steve Smith though):

Mike Mitchell, some low-rent jagoff, decided it would be a good idea to taunt Drew Brees prior to playing him twice. Smart.

Jerry Richardson, the Panthers' owner, is evil incarnate. I mean, look at this fucker: 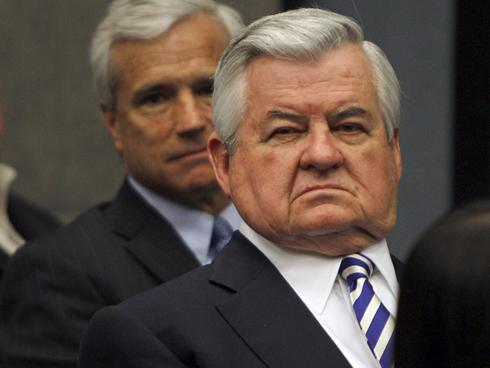 So what's going to happen on Sunday night?

At this point, who the hell knows?

The Saints are favored by four points if that helps. Ron Rivera's Panthers are 2-2 against the Saints, with two losses in 2011 and two wins last year.

The Panthers have won eight games in a row, and they're surrendering a league-best 13.1 points per game.

On Sunday they'll be looking to validate their ascent on national television against the division boss.

This is a huge moment for Carolina. The script is laid out perfectly. Are they ready?

As for the Saints, how will the loss in Seattle affect them? Was the loss just a minor blemish? Or was it a harbinger of fate? How will the Saints' offense handle a second-consecutive game against a top defense? Will their primetime dominance at home continue?

Ultimately, I can't see the Saints falling short at home, in primetime, on the heels of an embarrassing loss.

The promise of 2013 can't fade that abruptly.

If it does, I'll need therapy.

(I probably do anyway)