The fate of the 2013 Saints, quite ominously, hangs in the balance with one game left in the regular season.

A fatalist might say they're already circling the drain.


Plummeting to this point has been an exercise in frustration, considering where the Saints were and where they are now. Over the course of the last month, the Saints have been in a freefall.

They've lost three of four games. In two of those losses, they've been decidedly beaten by more physical, energetic, better-prepared teams. In the other loss, the Saints displayed a trait that's becoming disturbingly familiar: blowing a late lead against a good team on the road.

In all, the last month of Saints' football has made moderate the once-lofty expectations for the season.

After enduring the fugue state of 2012, the strangest year an NFL team has surely ever faced, the Saints of 2013 have been quite vexing and odd in their own right.

They've taken "weird" and made it an art form.

And I'm not just talking about CrossFit and "sudden" and Ms. Mae's and Garrett Hartley and an untested rookie left tackle taking his first snaps in week 16.

I'm talking about an offense and a defense that have flipped scripts, and a season with swings as volatile as an Archie Karas bender.

It all started in weeks one and two when the Saints submitted tepid offensive performances, and escaped each of those games with wins on the game's final play. Over the next three weeks, the Saints normalized with strong home wins versus Arizona and Miami in addition to a then-promising road win in Chicago. The 5-0 start, though, was probably a bit misleading.

In week six at New England, the 2013 Saints showed their dark side for the first time.

They slogged through a lifeless first half before claiming a second-half lead; failed to kill off the Patriots (and the clock) multiple times late in the game; and eventually allowed an all-but-certain victory to slip through their grasp as time expired.

In that game, we saw flaws that would haunt the Saints all season long: an unhealthy dependence on Jimmy Graham; a running game incapable of finishing out games; and quizzical playcalling in key moments.

Over the next five weeks the Saints regained their footing and won four of five (BUF, DAL, SF, at ATL), only losing to the Jets on the road.

At 9-2, with a showdown looming in Seattle for control of the NFC, the Saints then unraveled like a runaway ball of baring yarn.

The Seahawks pistol-whipped the Saints with menace and efficiency, a kind of beating foreign to the Payton-era Saints. Just when the Saints seemed to pass off that performance as anomaly in beating the Panthers 31-13, they then turned around and got out-everythinged in St. Louis during a deflating loss.

This past week in Carolina, with the #2 seed on the line, the Saints' offense looked laboriously hopeless.

Even after taking a fourth quarter lead, essentially on the back of Jimmy Graham, the offense couldn't close the game when given the opportunity. On the game's penultimate drive, the Saints' defense--after having played its best game of the season--cracked and surrendered the game-winning touchdown on a dizzying, stomach-turning, "oh god, please no" thirty-second touchdown drive.

As far as football is concerned, that loss was almost too much to take.

It meant the Saints, likely the league's best home team, boned a golden opportunity for a bye and a home playoff game: the postseason scenario these Saints, "headcases" as the Angry Who Dat blog calls them, badly need.

What's happened over the course of 2013 is the fundamental change in the way the Saints win and lose games.

The deeply-rooted expectation that the offense will uphold its end of the bargain is no longer truth. For this season, at least, the Saints are not capable of shooting themselves out of trouble on their way to victory.

Their formula for winning seems to rely on an ever-narrowing set of conditions and when one little thing goes awry, like a Brees interception that's immediately converted into 43-yard touchdown run, it seems like it's too much to overcome. For whatever reason, and this is just my opinion, the Saints have appeared more fragile as the season has worn on.

Finally the loss in Carolina capped off a brutal month of losses, one that saw the Saints go from near-top of the conference to now clinging to their playoff hopes with a game to play.

Like it or not, the Saints are in the midst of an epic collapse.

The question remains: are they down for the count?

That's the second-worst five-game stretch for points scored during Sean Payton's tenure; in 2007, the Saints scored just 79 points in their first five games on their way to a 1-4 start.

Before our eyes, the Saints' offense has aged like Lounge Act Elvis. No longer the King.

They've devolved into a plodding unit, one far less threatening and fast than we've seen in the past. They're heavily reliant on Jimmy Graham; the offensive line is terrifyingly gauzy; the rushing attack is an afterthought; downfield threats seem non-existent; and the wide receivers have fallen off the grid.

The Saints' wide receivers account for just 36% of the team's receptions, an amount far less than any other season since 2006. 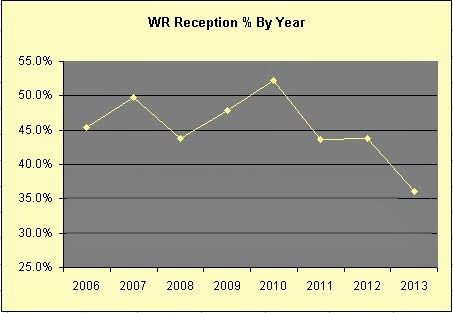 Most damningly, though, is the play of the offensive line. Through fifteen games, the Saints have surrendered 36 sacks. The previous high since 2006 was 26 sacks (2012), this year representing a 38.5% increase over their previous worst mark.

By contrast, in 2008, Drew Brees was sacked just 13 times while attempting 635 passes (a sack rate of just 2%). This season Brees has taken 36 sacks in 619 passing attempts, his sack rate nearly tripling from its best mark during the 2008 season.

The problems with the 2013 Saints (like every team) are varied, but the simplest explanation for the team's shortcomings, especially over the last month, is this: the Saints are a pass-heavy team that can't pass-block.

I'm far from an expert, but that seems like a fatal flaw.

Regardless, that inherent conflict has probably exacerbated the offense's other issues and as a result, the offense today appears as mild as it's ever been under Payton.

It's not all for naught, though.

What the offense has done well, even though this might sound incorrect, is protect the football this season.

If there's one thing promising about the offense at this late stage in the season, it's this. As we've seen countless times, offensive turnovers are the Saints' kryptonite. Avoid those, and the outlook vastly improves.

Though the Saints have turned the ball over six times in the last month, that's been a diversion from the norm this season. This trait (BALL SECURITY) is reassuring should the Saints make the playoffs, assuming they correct the recent lapses.

It's not too late to get it back.

On the other side, thank god for Rob Ryan and the Saints' defense.

Without them, the Saints would surely be staring another 7-9 season in the face.

Through fifteen games, the Saints' defense is fifth in points allowed (19.1) and fourth in sacks (47). The Saints' 47 sacks are their highest mark since the 2001 team recorded 53.

When the Saints' offense hasn't made their life unnecessarily difficult, the Saints' D has been up to the task all season long. If the Saints make the postseason, especially as a road team, the Saints' defense--and pass rush--should give them a fighter's chance to win.

The problem, though, is the loss of the secondary's two best players in Jabari Greer and Kenny Vaccaro.

The loss of Vaccaro, and its domino effect, seems especially troubling as it: 1.) likely moves Malcolm Jenkins away from cornerback duties and into a more traditional free safety role where he's been inconsistent for several seasons; 2.) forces Roman Harper to take on more responsibilities, some of which have catastrophic potential.

Don't forget that Rob Ryan called Vaccaro the best safety in the NFL. Hyperbole aside, that's an indication of how important Vaccaro is to the Saints' defense. Without him, the Saints lose their most physical and diverse player.

Rafael Bush's return from an ankle injury is coming at a good time, and with him back in the lineup, the drop-off from Vaccaro might not be all that damaging.

Still, it's a big concern.

The true band-aid for Vaccaro's absence, however, will be a fierce pass rush.

After fifteen games there is, of course, the not-insignificant matter of hope.

Why should we fans have hope for how the remainder of the season unfolds?

There are a few reasons.

1.) First among them is rooted in data: the Saints' "strength of schedule" and "strength of victory" statistics this season.

As illustrated in the Black and Gold Review's "Are the Saints Secretly Great?" piece, these two stats correlate strongly with postseason success during the past five seasons.

This season, the Saints have played the league's third-toughest schedule (and the toughest for any team vying for postseason contention) and also possess the best "strength of victory" mark in the NFC (this stat reflects how good, collectively, the teams are that the Saints have beaten).

Here's the distillation from BnG Review:


And you know, "one last thing to pin our hopes on" is all we Saints' fans have ever needed.

Since 2011, Sean Payton's Saints are 16-0 at home. This includes a 2011 wild card win over Detroit. If that trend continues on Sunday versus Tampa Bay, the Saints will qualify for the playoffs again this season.

And while the prospect of taking to the road for the playoffs isn't all that palatable, that fate is not yet decided. Far from it.

For that, we look to the Falcons and Tony Gonzalez. Ugh.


3.) Can the Falcons send Tony Gonzalez out a winner?

On Sunday, if the Falcons beat the Panthers and the Saints beat the Bucs, the Saints secure the #2 seed in the NFC. With that comes a bye week and a home playoff game.

Normally I would think in a scenario like this, with the Falcons wrapping up an extremely disappointing season, they would just roll over against the Panthers who still have a lot to play for.

But ... the Falcons are at home against a divisional opponent they know well. Combine that with Tony Gonzalez, universally-respected as one of the NFL's great competitors, playing the final game of his Hall of Fame career, and I expect the Falcons to play hard in attempt to send him out on as high a note as possible.

For his part, Gonzalez has played through injuries during a season in which he returned, fruitlessly at it turns out, for one last shot at a Super Bowl. At any point during the season's second half, Gonzalez could have let up. But he didn't. Here's to hoping Gonzalez's teammates return the favor and win one last game for him.

(Yes, I'm rooting for the Falcons. It's been that kind of season. You do what you gotta do. Desperation calls.)

With the Falcons-Panthers game at noon and the Saints' game at 3:25, we could be set up for something momentous on Sunday afternoon. It is by no means out of the realm of possibility.

Personally, I refuse to think it will happen any differently. It has to be this way: the Bucs standing between the Saints and the #2 late Sunday afternoon.

In the past several years, the Saints seem to be magnets for crazy.

Maybe, just maybe, Carolina will get spun up in the vortex and fuck it all up.

Anyway, after all of this, what's the point in giving up hope now?

The one thing that would make this Saints' season all the more strange is that, after the last month of wallowing in the shit and staring down a devastating collapse, the Saints somehow manage to emerge
with the #2 seed.

Really, it would make perfect sense.

The last game of the season is setting up to be the most compelling of all. Don't turn away yet.