As far as regular seasons go, I doubt there's been a more satisfying eleven-day stretch in Saints' history than the one we just witnessed.

Wins against Dallas, San Francisco, and Atlanta, and mounting butthurt among fans and NFL media centering on the Saints, have elevated this Saints' season to its entertaining best.

Let us recount with glee.

And for good measure, a fair dose of hate too.

First of all, among Saints' fans, there seemed to be an omnipresent angst after the Saints lost to the Jets in week nine.

On top of this, the Carolina Panthers then beat the 49ers in San Francisco. The media was in the midst of crowning Carolina the next big thing. A subset of Saints' fans across social media and message boards panicked. OH NO HERE COMES CAROLINA.

The neurosis wasn't all that surprising given this is a standard-issue response for Saints' fans scarred by decades of futility. The lingering memories of 2012 don't help either.

But then Dallas showed up in New Orleans, and the season took a turn for the better.

The Saints did their best 'Al Copeland' and delivered the gaudiest offensive performance in club history. They set an NFL record for first downs in a game. They set a franchise record for yards in a regular season game. They gained more yards in one game than any team since 1982*. (*regular season, non-overtime)

More, after the Saints humiliated the Cowboys in primetime, Jerry Jones lamented his decision to scapegoat and fire Rob Ryan:


“We thought it was best for us to go in the direction we are, and [firing Rob] doesn’t look good right now."

As a scapegoat, Rob Ryan is right at home in New Orleans and his own personal motivations (re-proving himself, etc.) mesh ideally with a Saints' franchise doing the same. That little mea culpa by Jerry Jones got things rolling before the San Francisco game.

The fun was just getting started.

A few days later, Jim Harbaugh and the 49ers rolled into town. Ugh.

After consecutive games of battering and handling the Saints, the 49ers only improbably hung around this time before losing. The Saints beating San Francisco was something of an exorcism (for we Saints' fans at least), and it marked a turning point in the Saints' evolution this season.

Though Garrett Hartley's three fourth quarter field goals should have been the story of the game, especially considering the sun-drenched ice he'd been skating on, the lasting memory that emerged from the game was Ahmad Brooks' hit on Drew Brees.

You remember, the one where Brooks tossed Brees to the turf by his face/chin/neck--bloodying Brees' face in the process--and yet everyone outside of Saints' fans cried over the penalty called.

Because in today's NFL where QBs are virtually untouchable, it's crazy --CRAZY!--that the refs would flag this:

If the initial hit didn't deserve the flag, then the follow-through/to-the-turf-by-the-head certainly did.

Somehow, the esteemed legitimate media disingenuously positioned Brooks' hit--labeled a penalty "ten out of ten times" by the league's former head of officiating--as the game-deciding (and according to Trent Dilfer, "season-altering") play.

Instead, you had Mike Greenberg spewing bullshit like this:


Drew Brees hit Ahmad Brooks in the arm with his neck. Not the other way around. But the league needs Brees. That's just the way it is.
— Mike Greenberg (@Espngreeny) November 19, 2013

Yes, of course. Brees attacked Brooks with his own neck. Maybe you can chalk that up to mindless trolling, but I kinda doubt it.

And that wasn't it.

The NFL's preeminent attention-whore, Ray Lewis, wrongly called the play "the most embarrassing call in the National Football League since the tuck rule."

Way to understand a decade's worth of rules, Big Ray!

Then again, Ray never much gave a shit about those.

On top of this, Lewis offered to pay for half of Ahmad Brooks' eventual $16,000 fine, a move the NFL deemed acceptable. That's right, an outside party offering to pay a large amount of cash for an illegal hit: totally acceptable now! Lewis' reasons for offering to pay?

Trent Dilfer, a former 49ers quarterback, said he was "offended" that Brees expected a penalty. His point was that Brees only had a "cut lip" and shouldn't have assumed a penalty in that situation. This apparently deeply offended Dilfer's high standards for NFL-bred toughness. Right.

By deriding Brees, Dilfer absurdly feigned a toughness of his own that couldn't in a million years hold a candle to the actual body of resolve, durability, and achievement that has defined Drew Brees' career.

But faking it has been Dilfer's modus operandi since his quarterbacking days in the NFL.

As if all that weren't enough Tedy Bruschi, a man still desperately clinging to the mundane, withered glories of days gone by, deluded in his recollection of factual reality, exhorted Drew Brees to "get tough."

No mention that it wasn't Brees' decision to throw the flag. Nor did Brees miss a play. Nor has he missed a game due to injury since arriving in New Orleans.

Never mind the fact that Brees guided the Saints down the field twice after the hit for the win. No mind that Brees recovered from one of the most devastating shoulder injuries without ever missing a game. That Brees, what a huge pussy! Right, Tedy?

In a sports media culture defined by hyperbole and driven by shallow, inane reactions, Bruschi and company sunk the basest of analyses to an embarrassing, moronic low.

(we'll save Mike Mitchell for next week) ...

This was just the beginning, though. It got better on Thursday night in Atlanta.

Akiem Hicks did this, without a penalty flag being thrown, and the pearl-clutchers shit their pants:

You wanna talk about the Saints tying asses in knots, league-wide?

That no-call on Hicks sealed the deal. OMG HOW CAN THEY NOT THROW A FLAG! NOT FAIR!

The laughs then reached epic levels when Jimmy Graham broke the Georgia Dome: 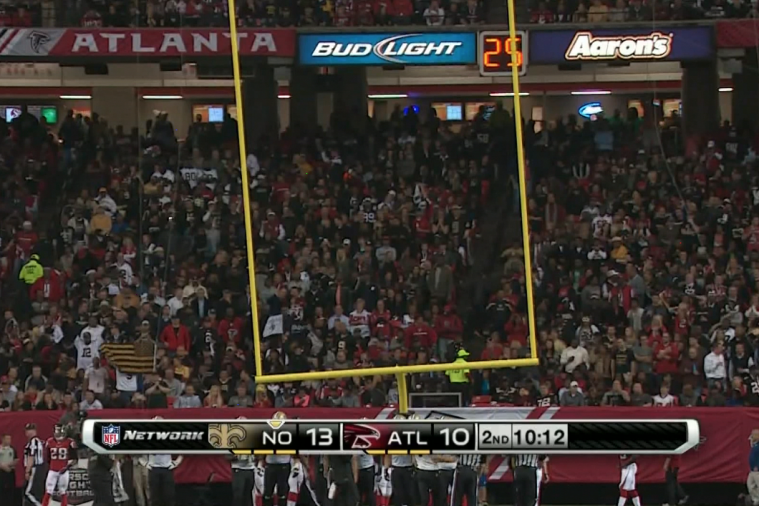 Next, in a most succinct embodiment of his capitulating wont, Matt Ryan did this on a key third down:

Instead of trying to score, Ryan just gave up.

It's not really surprising though, given Ryan's history against the Saints.

For the now-routine ending, Sean Payton, up four points, iced Matt Bryant as Mike Smith was again bested by a fourth-down decision.


"I don’t know what is more mind-numbingly awful. Mike Smith opting to kick a field goal down by four points with 2:24 left in a game, or the almost universal praise after the game that this was the right decision.

I can go about explaining it any number of ways, but this was a dreadful decision." 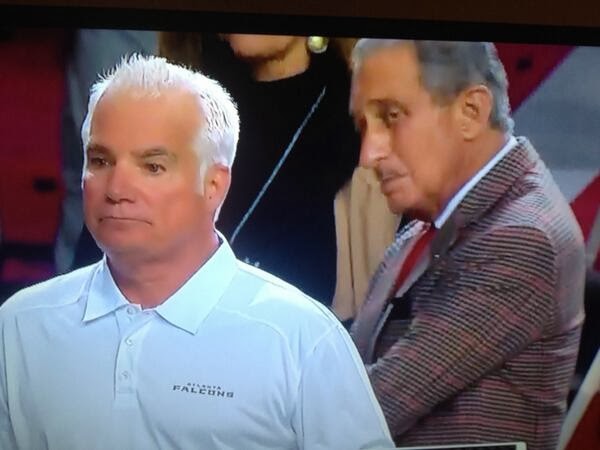 Let's all hope Coach Smith doesn't show up frozen in some sketchy meat locker. He might not be the greatest coach, but he does seem like a decent man.

The coup de grace, though, came when the Saints stiffed the NFL Network's post-game show.

After each Thursday night game, the winning team sends a player to sit on set with Rich Eisen and the crew. Interviews, recaps, bro-love, analysis, backslaps, and whatnot.

But the Saints? Nope, no thanks. Maybe next time, fellas. Talk amongst yourselves.

The reaction? Curt dismay from the league-owned network:


No. And no. RT @glenn2722: @richeisen any insight on why the Saints declined the post game interview? Has any other team done this before?
— Rich Eisen (@richeisen) November 22, 2013

This three-game stretch, one in which the Saints won three games in eleven days, more than the sad Falcons have all season, forced the Saints into the NFL's collective focus.

For more than a week now, the Saints have commanded the NFL's news cycle in the only way they seem to know how: polarizing and defiant.

Fantastic. It's about time. I wonder if Rog is privately fuming?

At the same, it looks like it's all coming together for the 2013 Saints.

And it's happening at the perfect time with the showdown in Seattle on tap.

It's hard to argue with that characterization. Considering the implications for homefield advantage and this game representing the last of the ghosts haunting the Payton-era Saints (a big win against a tough opponent in an outdoor, road environment), I'd say the stakes are as high as ever.

If you listen to the pundits, and a gaggle of Saints' fans too, you'd think the Seahawks were some unstoppable juggernaut.

Remind me: what have the Pete Carroll Seahawks ultimately accomplished? Losing to the Bears and Falcons in divisional playoff games?

Not exactly a terrifying body of work.

Let's consider that the Seahawks have played the fourth-easiest schedule in the league this year; have consistently struggled to beat mediocre teams like Houston, St. Louis, and Tampa Bay; have an offensive line that's been the team's weakness this year; are missing Brandon Browner, their #2 cornerback; and have yet to face a team as well-rounded, well-coached, and talented as the Saints.

Somehow though, as plenty of people would have you believe, the Saints must play a perfect game in order to escape with a win in Seattle.

The Saints, against a top-12 schedule, rank in the top-5 in both points scored and points allowed. The offensive line is coming together, as the Saints have rushed for 5.1 yards per carry (437 total yards) over the past three games. Additionally, Brees has been sacked only three times in the last three games after being sacked twenty times through the first eight.

Equally important, the Saints--not the Seahawks, not the 49ers, not the Panthers, not the Bengals, not the Texans, not the Ravens--have the NFL's best defensive line in 2013. For a Seahawks' offensive line struggling to pass protect this season (Football Outsiders ranks them 30th), defending a Saints' defense ranked # 1 in adjusted sack rate will be no easy task.

It might buck the conventional wisdom, but that is a match-up squarely in the Saints' favor.

Unlike anybody in the Seahawks' front-seven, the Saints' Cameron Jordan is a legitimate Defensive Player of the Year candidate.

As I see it, almost all of the "difference makers" reside on the Saints' side. You don't really think Pete Carroll is going to outscheme Sean Payton in consecutive games, do you?

Is all that enough for the Saints to overcome the Seahawks' homefield advantage? I say yes.

Even as Saints' fans struggle to adjust to a different Saints' team, it seems like everyone else is even farther behind.

Whether the NFL media points this out (that the Saints are one of the better defensive teams in the NFL this year, and that's why they're well-positioned to win the NFC) in the lead-up to the game is anybody's guess.

The Seahawks--a team slated for greatness in the preseason and now riding the coattails of that confirmation bias--are 13-0 at home with Russell Wilson at quarterback. I guess that's where this whole "unbeatable" thing comes from. 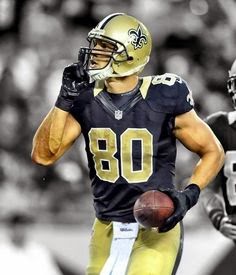 But will it last another game?

Until the Saints win an outdoor road game like the upcoming test in Seattle, they'll continue to be doubted as true contenders outside of their home environs.

My guess is that, on Monday, December 2nd, the Saints will quiet the doubters.
Posted by RNG at 8:57 AM