DO YOU DO YOU WANT MY FACE? 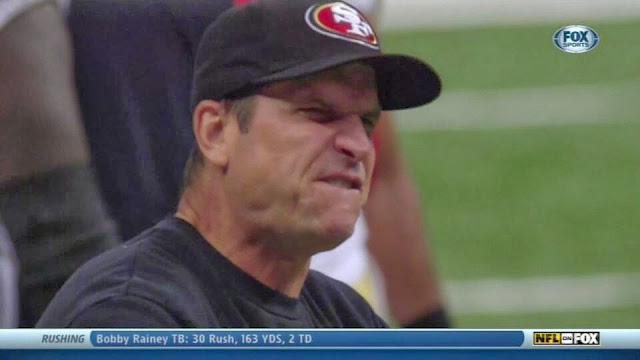 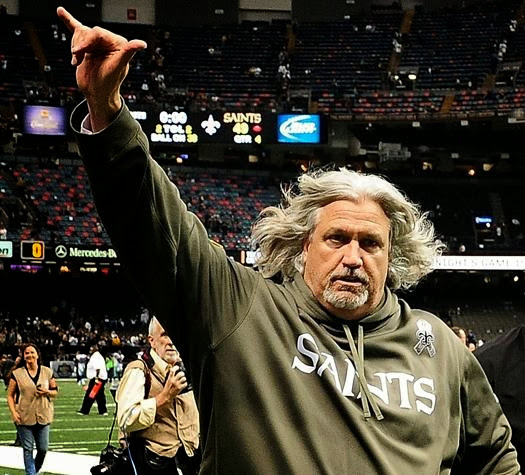 Let's go ahead and root out the heresy.

This shit has gone on for far too long.

1.) The Saints potentially playing an outdoor road playoff game.
2.) The likely inclement Super Bowl weather posing a significant threat to the Saints, should the team make it to New York in February.

It's been a long time coming, but fuck all that.

The Saints have a real defense.

Not the genial, pliant, milquetoasty Gibbsian unit. Not the unsustainable, zero blitz-addled freakshow. Nor the fossilized, obstinate, inordinately complex, red-carpet-to-the-end-zone circus of pain.

No. None of that shit.

Courtesy of the shaggy, itinerant Rob Ryan--finding himself long-last at home in New Orleans, Rolling Rocks and 4-2-5's, and on a revenge tour of his own--this Saints' defense is now the differentiating factor in the hazy competitive landscape of the 2013 NFL.

Who saw that coming?

Yes, Rob Ryan is the hinge on which the league's balance of power swings this season.

As far as the Saints are concerned, this is the most welcome of developments.

Thanks much, Jerry Jones. Mighty kind of you, especially after you let Sean Payton walk out of the building. Now if you don't mind, Monte Kiffin needs his afternoon cup of Sanka. Can you help out with that?

Let's take a look at some numbers and factoids, shall we:

For four straight games, opposing offenses (Bills, Jets, Cowboys, Niners) have converted less than 30% of their third down chances (14-for-48 to be exact). To date the Saints are third in the NFL in this category, a metric of the utmost importance. Even better? In the last two games, the Saints' defense has held the Cowboys and 49ers to a shameful 6-for-24 on third down.

And mind you, these are not bad offenses. The Cowboys' offense is among the handful of the NFL's best, and the 49ers came into Sunday's game ranked 9th in offensive DVOA.

In case you forgot, this is largely the same Niners team that scored 45, 28, and 31 in last year's postseason. You might have thought otherwise after watching them on Sunday, a game they desperately needed to win.

The Saints harassed Colin Kaepernick, a dude Ron Jaworski said not long ago could be one of the greatest quarterbacks of all time (WHAT?!?), sacking him three times and hitting him another six. For good measure, the Saints' defense sprinkled in five tackles-for-losses.

And did you see Akiem Hicks? Good god, man. Huge. Superfreak athletic. MOTIVATED. When he gets all King-Kong-beats-his-chest pissed off and then proceeds to smash apart the opponent's offensive line? Holy shit. He did that a bunch on Sunday.

By the way, you didn't forget about this did you?

If Cam Jordan is the defense's Jahri Evans, then Hicks is their Jimmy Graham.

This Saints' defensive line is a marvel. They may not be the defensive-line equivalent of the linebacking Dome Patrol, but they're pretty damned good.

The days of the Payton-led Saints getting pushed around on the line, battered against physical opponents, and labeled as "finesse" are over. You can largely thank Rob Ryan for that.

On the season, the Saints are fifth in points allowed per game (18.3), sixth in sacks, and seventh in passer rating allowed. These are the hallmarks of an excellent defense, one that has performed consistently now for ten games.

You can shed your fear. They sure as shit have.

Had it not been for two aberrant plays (the Lance Moore fumbled punt and the Corey White interception-fumble-whatever-the-hell-that-was), this game would have unfolded much, much differently.  That the Saints won the game on the last play distorts the reality of a dominating, physical performance.

As it turned out, this game was a rite of passage for the Payton-era Saints or, at least, the modern incarnation of them.

But on Sunday that script flipped even though the Saints turned the ball over three times to the Niners' one.

After getting physically manhandled by the 49ers in both 2011 and 2012, the Saints played one of their more physically-imposing games in some time, rendering the highly-correlating-to-victory turnover margin moot.

The Saints won the battle on the defensive line against a Niners' offensive line that many consider to be the league's best. The Saints' offensive line, for their part, played equally well for a second straight week. They assisted the running game to the tune of 4.0 yards per rush on 23 attempts, and controlled the line of scrimmage in the process.

If a three-point win can ever be considered "dominant," then this was it.

By my estimation, this was a watershed moment for the 2013 Saints. Things look increasingly promising for the Saints' chances in the NFC.

Sunday was the practice test for the showdown in Seattle looming in two weeks. The Saints look as ready as ever.

In the interim, the Falcons are up on Thursday night.