Part two of the Sean Payton era gets underway on Thursday night, and the Saints' need for acquiring affordable, young talent is as important as it's been under the Payton-led Saints. 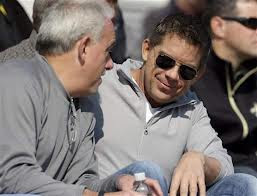 If the Loomis-Payton Saints have exhibited a weakness, it's been in the consistency of their drafting.

In large part, the Saints have subsisted on the spoils of their 2006 draft (ahem) bounty, with sporadic hits and too-frequent misses since then. Today, there are no players on the Saints' roster from either the 2007 or 2008 draft classes. The classes from '09 - '12 have produced a foundation that I'd deem mediocre. Or unremarkable. Or forgettable. Take your pick.

With an aging roster--especially on the offensive side of the ball--and an increasingly perilous salary cap position over the coming years, the draft (this year's and next's) holds the keys to the Saints' ability to remain a contender while the proverbial window still permits the gusts of championship aspiration.

This year isn't just a watershed because of Payton's return to sideline, it's equally so because this draft, and the five meager picks the Saints hold at this point, will noticeably impact the Saints' ability to compete during the next two seasons. As Ralph pointed out, the 2013 roster isn't quite what it's been in the past. With that said, it's crucial for the Saints to reverse their recent, stagnant draft trends.

In my opinion, the Saints would most immediately benefit from a capable pass rusher. Whether Victor Butler or Junior Galette or Martez Wilson will be that guy remains to be seen. Whether Barkevious Mingo or Jarvis Jones is still on the board at #15 is unknown. If Wang gets his way, it's Mingo in a landslide. And while plenty of people might disagree or point out the potential shortcomings of drafting a "raw talent" like Mingo, I think the majority of fans, once it happened, would be pretty damn excited at the prospect of what might be with Mingo: a player who fills a glaring need, and one with the tools to be an all-pro.

The problem is, I don't think there's much of a chance that Mingo gets out of the top-ten. His potential is too damn plentiful. So that leaves Jarvis Jones as the next best likely candidate as a pass rusher. But will he even be there? And if he is, does he offer a comparative potential, so much so that the Saints draft for need and overlook the peripheral concerns surrounding Jones?

Here's what Coach Payton recently said about the team's possible first round selection:


Certainly we’re looking closely at our defense, and that would be a priority ... The challenge is when you see the magnet that sits up there much higher than the defensive player, for instance, and then are you just strictly trying to draft a need player as opposed to maybe the best available player. And I think the key is just, what’s the gap? And so when a player falls or you feel like you have a real high grade on a player, you have to pay attention to that.

I interpret that to mean the Saints, with their first round pick, are focusing on defense unless there's an offensive player that's too good to pass up, need be damned. So who might that offensive player be?

While I'd be content if the Saints drafted a left tackle there, I don't think that's likely to happen. It sounds to me that Payton has settled on letting Charles Brown and Jason Smith battle it out at LT:


We signed Jason Smith recently. Charles Brown is a guy that is going to be competing over there. This is a great example of a job that is wide open. Hopefully the guys that have a chance to compete for that position step up and someone separates themselves. That kind of thing happened when (Jermon) Bushrod came into that position in our scrimmages against the Texans (in 2009).

We lost our starter there and Jermon stepped in and really earned the spot and became our starting left tackle for quite a while. I think time will tell. We have some guys that will get reps at that position. Hopefully it’s an easy decision and someone separates themselves.

If that means left tackle is less of an early round possibility, then that means, if the Saints do draft an offensive player with their first pick, it's likely either a wide receiver or, perhaps, a tight end. The most talked-about WR is, of course, West Virginia's Tavon Austin. He's slippery, and fast as fuck. He might be the next Desean Jackson. Or Darren Sproles. He also might be closer to Dexter McCluster or Trindon Holliday. Even so, that's all beside the point in my opinion.

Drafting Austin, a player whose skill set duplicates that of the roles filled by Sproles and Lance Moore, would make his selection ... I dunno ... gratuitous. I'm sure Payton would love to have him, and maybe that will trump the debate about everything else if he's available, especially considering that Sproles and Moore aren't exactly young anymore, and I'm sure it would be immensely entertaining to add Austin to the offense and special teams. But if he's anything other than immediately dynamic--that is, if he doesn't elevate the Saints' offense to 2011-level lethal, then selecting him is a minor disaster.

The Saints' offense will be plenty capable without him.

What nobody seems to be mentioning, as far as the offense is concerned, is drafting a tight end. Especially because of the presence of Jimmy Graham and the signing of Ben Watson, the possibility of drafting a tight end is an afterthought. And maybe rightfully so. 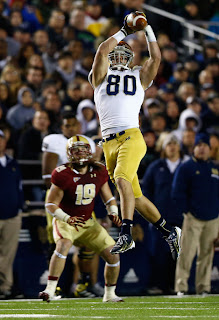 Not only would adding Eifert mirror the multiple TE trend pioneered by Bill Belichick, it would also add a player who plays more like a WR than he does a traditional tight end. His scouting profile credits him with a "receiver-like build" and also notes that he "lines up with his hand down, in an H-back role, in the slot and outside."

Selecting Eifert both fills a need--that being another big, young, competent pass catcher--and it diversifies the offense. A new Paytonian wrinkle for 2013. On top of that, adding Eifert protects the Saints in the unlikely, but worst-case, scenario that Jimmy Graham doesn't re-sign with the team after the 2013 season.

Though Eifert appeared to be considered a mid-first round talent, ESPN's Todd McShay recently had Eifert going off the board at #6. I realize that's all a product of speculative mock drafting bullshit, but McShay has been the most accurate guy recently. We might want to give some weight to his opinions.

Eifert is definitely a valued commodity this year. The main issue, though, is whether he'll even hang around long enough for the Saints to potentially take him at #15.

Might he be that "magnet" Payton was talking about?

So where does Chris Ivory fit into all of this?

In case you haven't been following along during this (thankfully) slumbering offseason, Ivory appears to be on the cusp of being traded to the New York Jets. Andrew has speculated that won't happen until draft day, and that a potential trade-up looms. The Jets own the #9 and #13 picks, and there exists the possibility that a trade for Ivory will involve the Saints moving up to secure a player before the 15th pick.

How that might play out, whether it's a swap for the 9th or the 13th pick, what other compensation might be involved from either side, and who the Saints might be interested in moving up for remain a jumbled mess of conjecture.

But the possibility is there, and this event may be the key to the Saints' entire draft. I'd say the likelihood of the Saints trading up will involve a pass rusher, but I don't know shit. Just guessing here.

Whether any of this comes to fruition, or whether we're all out-thinking the room and Triplett is right that the Saints stand pat and take Kenny Vaccaro, is what the fun is all about.

One way or another, the Saints need to come away from this draft with players who can contribute now and into the future. With another poor draft, the Saints run the risk of doing what the late-Manning era Colts did: bloat their salary cap with a QB's enormous contract, and fail to effectively draft competent, affordable, young talent. When Manning got injured, the Colts imploded. And though it miraculously worked out in their favor when Andrew Luck landed in their laps, it rarely works out so neatly and seamlessly.

The Payton-Brees' Saints still have years of competitiveness left, so long as they effectively refresh the roster tree of talent with youth.

That starts in earnest on Thursday night.

Let the fun begin, and while we're at it, let the boos rain down on Roger Goodell.