On Roger Goodell and the Media 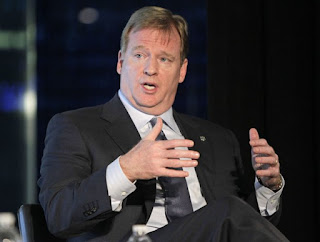 For the past ten days or so, the media covering the NFL has made it a priority to humanize and praise Roger Goodell in spite of Goodell not being worthy of these canonizations.

The timing of this, obviously, is no coincidence as it’s intended to repair Goodell’s badly-damaged reputation among Saints’ fans during his time in New Orleans.

It’s not that Goodell cares about what New Orleanians and Saints’ fans think, it’s just that he needs to balance a narrative that has cast him in a largely negative light.

Goodell hasn’t unfairly earned this negative image, either. In fact, he’s unwittingly crafted this reality through his various misdeeds as Commissioner of the NFL. For the sake of brevity, I won’t recount them all in detail but in no particular order, Goodell has presided over all of this: BountyGate; the NFL’s lockout of the players; the NFL’s lockout of the referees; the purposeful destruction of the SpyGate evidence; collusion among the NFL’s owners to suppress players’ salaries; securing “lockout insurance” for NFL owners by fraudulently engineering television contracts; a continued drive for an 18-game season in spite of the “player safety” initiative; and the concussion crisis.

Fans who attend the NFL draft routinely boo Goodell mercilessly. 61% of NFL players disapprove of him.

Regardless of the fact that the NFL’s profits have soared, despite the NFL’s ubiquitous popularity, Goodell is still unable to conduct himself favorably.

In spite of all of this, the media—by and large, though not in full—has gone to great lengths these past ten days to paint Goodell as some benevolent, gracious force. Besides the fact that it’s completely disingenuous, it is also revealing of Goodell. That his handlers, his advisers, and his PR weaponry feel the need to conduct a concerted campaign to validate Goodell reveals much.

One, it’s indicative of the fact that Goodell’s track record is so lousy that it’s deemed vital to strategically position him as galvanizing and well-intentioned via carefully-crafted media campaign. Was he really this, no media campaign would be necessary, nor would negative reaction to his positioning as such predominate.

It’s clearly not a coincidence that, suddenly, article after article repeats a familiar message that goes something like this: Goodell saved the Saints and the Superdome after Katrina, or; Goodell is faced with making tough choices to “change the culture," or; Goodell is a good-humored guy because [insert incredibly lame anecdotal story from 25 years ago here], or; Saints’ fans shouldn’t embarrass their city by expressing their disdain for Goodell.

These distinct talking points didn’t randomly coalesce in the lead-up to the Super Bowl. They’re all a result of a premeditated strategy to ease Goodell’s potential difficulties in New Orleans and seek balance for his damaged reputation. The fact that this is necessary is damning not to Saints’ fans and to New Orleans, but damning to Goodell himself.

He’s painted himself into an unfavorable corner, and now his handlers are forced to repaint the room.

They’ve resorted to what Wang called “ridiculous, revisionist assertions” and “condescending pre-emptive admonitions coming from the mayor and Roger's sycophants in the Legitimate Media.”

You’d hope that they’re not fooling anybody, but they did it during BountyGate and I’m sure they’re doing it again now.

This balancing act is just a repeat of the BountyGate strategy, anyway. For years the conventional narrative in the public domain was that football was inherently dangerous, that post-career health maladies were a result of football’s violence, that the NFL failed to educate their players on the risks involved, and that the NFL callously discarded its retirees.

When that narrative reached a critical mass and threatened to significantly damage the NFL’s brand and profitability, the NFL took full measures in attempt to alter that narrative in their favor. They did this, partly, by setting the fire of BountyGate in order to be seen nobly extinguishing it.

BountyGate was just a tenet of a larger strategy aimed at changing conventional wisdom that was injurious to the NFL’s long-term viability. Instead of actively attempting to protect player health, the NFL only needs to craft a perception that they are doing so. This is why you see the NFL continue to push for an 18-game season while championing “player safety” concurrently.

Much the same way, the NFL PR’s machine and enabling media was forced this week to shift the narrative on Goodell from megalomaniac to principled, benevolent leader. When critical mass and widespread sentiment became so glaring that it threatened to be damaging to the NFL on its grandest stage, a counter-strategy became a necessity.

And the NFL media makes the transaction complete. They are the middlemen in this trafficking of bullshit.

Aside from trustworthy and skeptical voices like Mike Florio, Bill Simmons, and Dan Lebatard, the majority of the media serves only to stenograph whatever message the NFL spoon feeds them. It’s rooted in a faulty assumption of infallibility.

Moreover, it’s revealing of an establishment media that operates more as an arm of the NFL’s marketing department, and less as objective assessors and seekers of truth.

If sports journalism isn’t already dead, then last rites are on the way.
Posted by RNG at 3:26 PM