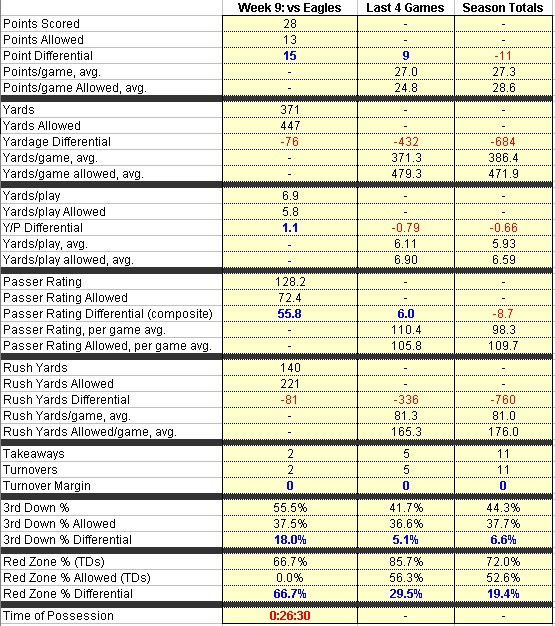 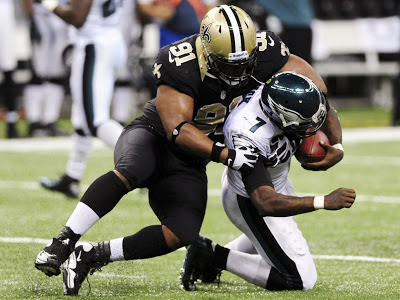 Maybe Steve Spagnuolo is yet to find that magic wand he keeps talking about, but he and Pete Carmichael summoned some strange magic on Monday night and provided a glimpse of promise for the season's second half.

It was a throwback primetime performance, just a week after the Saints were pasted and embarrassed in Denver.

So what happened? The Saints' defense was hostile enough to shut out the Eagles in five red zone trips and produce a vaunted, adjusted PTOMAC™ of +6.

Will Smith and Jonathan Vilma dusted off their vintage 2009 forms and helped the Saints stay one game back in the loss column for the last wild card spot. Imagine that: Vilma and Smith, staving off suspensions, helping the Saints hang around for another week. So go ahead commish, take a moment and suck on that, why don't you?

Cam Jordan played (I think) his best game as a professional, and continues a steady upward trajectory after a season and a half of NFL football. All's not lost.

Though the Eagles' offensive line appeared staggeringly insufficient, the Saints' front seven (dare I say?) dominated them. That's all that really matters right now. There's proper perspective to be accounted for, but the Saints' defense flashed some signs last night. Even if it was for just one game, it was a welcomed sight. Kill The Head and all that.

In a similar vein, the offense looked like a different, better unit against the Eagles. Last night's gameplan and overall efficiency, combined with the explosive capacity displayed two weeks ago in Tampa, shows that the offense is close to finally putting it all together.

It couldn't come at a better time with the villainous Falcons coming to New Orleans in a few days.

What's strange about those two previously mentioned offensive performances? In the two games that the offense has looked its best, they've been without Jimmy Graham and Darren Sproles respectively.

Presumably, this has forced Carmichael to re-think his gameplans and take an approach that's not heavily centered on the offense's two best playmakers.

In the recent past, the Saints' offense has defined itself through its incredible diversity and shared-wealth philosophy. At times this season, it's seemed like the offense has strayed from that concept because of the immense playmaking capabilities of Graham and Sproles, and thus lulled the offense into predictability and stagnation at times.

Added to that is that opposing defenses are better prepared to defend Sproles and Graham after digesting a year's worth of :gamefilm: on their roles in the Saints' offense. 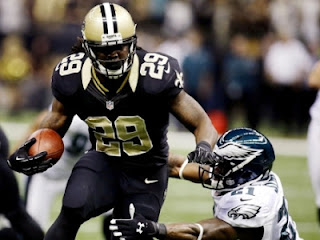 That Philadelphia was likely not fully prepared for this approach reveals the significance of the creative scheming and diversity that's been lacking without Payton calling the shots.

This isn't to suggest--at all--that the Saints' offense is better off without Graham and Sproles. Of course it's not. But it is to say that, without them, Carmichael has designed his most effective gameplans.

Ideally, the recognition of this--creativity, diversity, unpredictability--will help the offense finally put together a string of 2011-ish offensive performances when Sproles returns. A fully healthy offensive squad, plus gameplanning more varied and less reliant on two players, will help the Saints make a run in these last eight games.

They're not out of this thing just quite yet, so stay tuned. There have been plenty of moments of despair this year, but there's still a little beam of hope bouncing off the walls of this dark cave of a season.

And really, the timing couldn't be any better with the Falcons coming to town. The Saints are fresh off their best win of the season and have won three of four after a disastrous start.

All of a sudden, it feels like their confidence is soaring as the hated, undefeated Falcons come strutting in. A statement win next weekend will make this strangest of seasons all that more compelling.
Posted by RNG at 12:12 PM