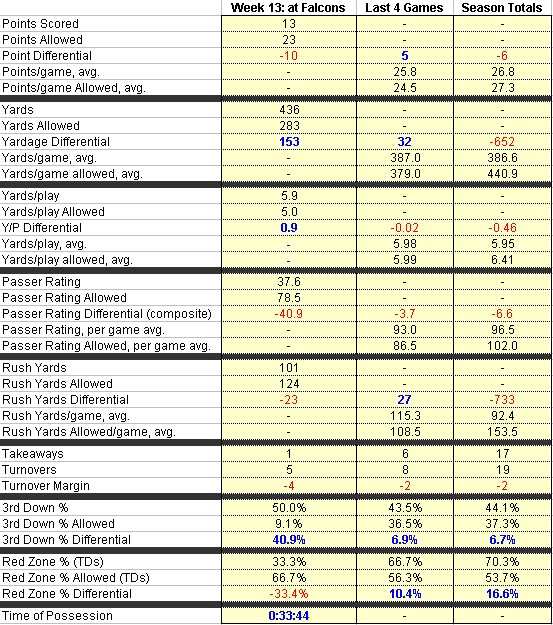 In retrospect, it couldn't have ended any other way.

After a nightmarish calendar year for Saints' football, it was only fitting that the Saints took a killshot in the Georgia Dome against the fraudulent Falcons, on a night where Drew Brees, for the second straight week, submarined the team with an unrecognizable performance, and thus bookended this horror show that started 11 months ago with the playoff loss in San Francisco. Two rivals, two seasons, two bitter losses.

This was a perfectly deflating way to bring the strife and the frustration and the injustice and the shortcomings of 2012 all full circle.

A disaster in whole.

It started back in January with the Saints as the hottest team in the league--winners of nine straight--rolling into San Francisco against one of their longtime rivals, a team that haunted my adolescence with their mostly effortless domination of the Saints. This was a time to make it right, but that never happened. When the Saints shit the bed, when they lost that game in heartbreakingly cruel fashion, I never imagined there was a lower point for the franchise this year.

But it's been a continual erosion since, from the heights of championship aspiration, tantalizingly out of reach early in 2012, to a lifeless swing from the gallows pole late in the year, as the team's fortunes have reversed in grotesque fashion.

In Atlanta last night, the Falcons all but destroyed the Saints' playoffs hopes for 2012 and sealed what was likely the Saints' inescapable fate this season.

For it to be at the hands of a different team seems almost averse to script. Where January in San Francisco was vicious and portending, yesterday in Atlanta was ephemerally stunning but mostly just sad.

In between those two games came BountyGate, a sinister episode of devilish proportion, one that dragged the team and its fanbase through a series of damning events that are still yet to be decided.

It is BountyGate that compounds the sting of these losses, and serves as a continuing reminder of what could have been. What should have been. The scars of BountyGate will remain in perpetuity, but the freshness of the wounds manifests a sting that cruelly reminds us that this was once a championship-worthy contender, suddenly and savagely chopped down at the knees in a hollow, transparent, bullshit Goodellian show of force.

On a damn near weekly basis, there's an episodic feeling of being wholly wronged by the NFL, for them having taken from us what we earned from years of love and loyalty and undying hope: a championship contender, year in and year out.

When the Saints finally transcended failure and futility, the NFL reached out and snatched it from us in a diabolical blame-shifting maneuver. And it is both enraging and terribly sad.

Roger Goodell, that bilious, vile shell of a human being, committed a devilish act of unforgivable magnitude against the Saints and their fans and for that, we should never forget. Fuck him.

In what is likely to be an omnipresent series of articles wondering "What's wrong with Drew Brees?", here's one person's opinion. Brees is a man stretched much too thin, who finally froze and cracked under the thunderous pressure of 2012.

Since 2006 Brees has gone from a boyish gym rat to a husband and father of three; the NFL's highest paid player; the face and voice of the NFL's Players' Association; BountyGate's most outspoken critic; a businessman; a ubiquitous corporate sponsor; a genuine philanthropist; and the face of the Saints franchise and the New Orleans community.

And finally, it was too much for him to handle. Last night Brees shattered into a million dulled shards in front of our eyes, in a performance as shocking as it was bad.

At this point in his career, with his skills and achievements and high standards, Brees aimlessly staggered into uncharted territory last night.

After two weeks of debilitating decisions on the field, when the Saints' hopes hung by a baring thread, this bizarro version of Brees was devastating in all the wrong ways.

It was his teammates who held up their ends of the bargain, and Brees who shuttered victory.

It would be silly to think that Brees is immune to failure, that he and he alone can elevate the Saints from the depths of their shortcomings, but when your contract consumes nine digits, when the team, by and large, puts its eggs all in one basket, it is that person's responsibility to deliver on that trust and expectation.

When Brees so centrally impacts outcomes, he is fair game for praise and criticism alike. He doesn't get "Breesus" unconditionally. It comes with the territory. It's not so much that Brees played a couple of bad games. It's how and when he did it. And because it's unlike him to do so, and so foreign for us to experience, the magnitude of that failure is greatly amplified, especially when it's connected to the events of 2012 in composite. It's a fitting footnote to the season.

This isn't to be ungrateful for everything Brees has done for the Saints' organization; that should go without saying. It's only to say that Brees, like every other player on the Saints' roster, is subject to a rational criticism when he comes up short.

I'm sure Brees will rebound and finish the season on a strong note. That is his wont. My hope is that he'll be reunited with Sean Payton, a coach that can both ground and guide Brees most effectively, and relieve from him the pressure of being all things to all people. It's as unrealistic as it is unsustainable.

Which finally leads us to ...

If there was ever a one-week stretch where the effects of Sean Payton's absence were so clearly illustrated, this was it. To examine in detail the varied situations where Payton would have, likely, made all the difference would be a pointless meandering.

His importance is beyond dispute, and it was absurd and delusional for me to think the Saints would be contenders without him.

Payton's return to New Orleans, while uncertain at this point, is essential if the Saints harbor legitimate championship aspirations in the coming years. With him, a return to normalcy is likely. Without him, the prospects are much less clear.

It is Payton who has unearthed and maximized the talents of countless players: Brees, Colston, Moore, Graham, PT, Ivory, and a host of other players. These players are representative of Payton's core strengths, and it feels like I've taken for granted what Payton has built in total.

It is much more than being the NFL's best playcaller and offensive mind. That is but a small, though important, piece.

It's equally about his organizational infrastructure, his eye for talent, his ability to relate and motivate, his willingness to risk and think unconventionally, and his unrivaled competitive nature. Many of these elements have gone missing this season, and it's no surprise their absence has resulted in more losses than wins through 13 weeks.

If 2012 stands to be but an unfortunate detour on an otherwise rewarding journey, Payton's return in 2013 is essential.