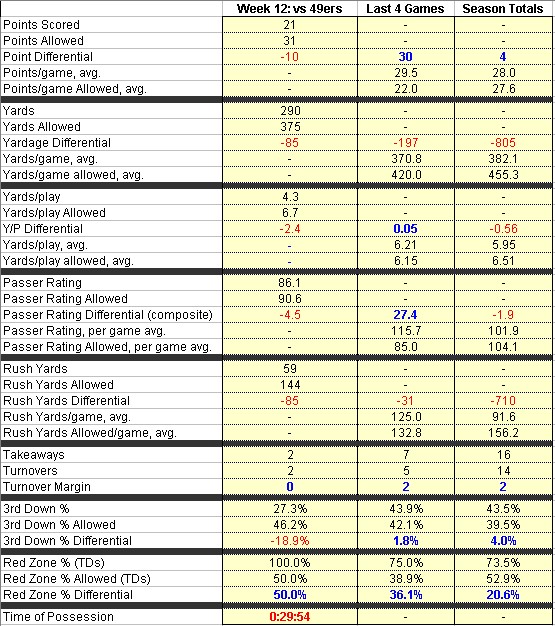 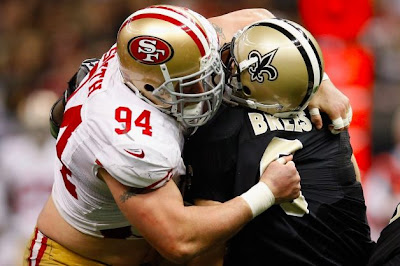 The symmetry between Sunday's loss to the 49ers and January's painful divisional round playoff loss was agonizingly similar, and the 49er-associated miseries of this year, and of many years gone past, only deepened.

Like Pierre Thomas' fumble on the two-yard line in last season's playoffs, Brees' first-half interception set in motion a chain of events the Saints proved incapable of recovering from.

Last year it was a fumble that culminated in the loss of a key offensive cog, an opening drive that produced no points after a methodical march, a long TD surrendered to Vernon Davis, a Brees interception, another 49ers TD, a Roby fumble on the ensuing kickoff, a subsequent 49ers' FG, and the resulting 17-0 hole the Saints couldn't emerge from. Remember all of that? Ouch.

That's why yesterday's loss hurt so much, and probably in disproportionate measures: because it tore open a wound that's still not fully healed.

On Sunday, it was Brees throwing one of the most dispiriting, ill-timed interceptions I can recall. After handling the 49ers for much of the first half, and with a chance to take a double-digit lead into halftime of a game the Saints' home crowd was increasingly impacting, Brees giftwrapped a stunning equalizer and stabilized a woozy team previously backing into the ropes.

In the span of the next three minutes, the 49ers scored twice more, once on the second half's opening drive, and yet again on a Brees' pick-six. 21 points allowed in under four minutes. Brutal.

When you combine that with the sudden reversal of the Saints' optimal strategy of playing with a lead, to being forced to battle back against the league's best defense, it was another domino effect that proved too onerous to overcome, and one that prolonged the agony of that recent playoff loss.

An odious doppelganger, if you will.

And one that we should, finally, bury in all of its hideous revulsion.

As much as I'd like to write this game off as the Saints being outplayed by a superior team--much like I did after the Denver game a few weeks back--I can't bring myself to do it because I just don't believe that.

This was a self-inflicted loss, one heavily weighted by poor decision-making by the Saints' best player on two different occasions. While the Saints might be well capable of beating San Francisco any given week, the fact is that the Saints gave it away yesterday, just like they gave it away last January. And now they're in the tightest of spots with five games to play.

The good news? Yes, there is some of that. It wasn't all bad yesterday because the entirety of the Saints' wild card competition lost: Seattle, Dallas, Tampa, Minnesota, and even Green Bay.

With five games left, the Saints are still one game back and right in the thick of things. Getting into the postseason probably means rattling off five straight wins, but 4-1 over the next five might still be good enough to do it.

There were enough positive signs yesterday to reinforce the notion that the Saints are continuing to improve, and still getting closer to playing their best football of the season. Winning five straight isn't out of the question, but it will take smart football and a little bit of luck.

It all starts with Atlanta on Thursday night. Why should we be confident for victory on a short week, on the heels of an incredibly physical game, against a 10-1 team?

1.) History: the Saints are 11-2 against the Falcons since 2006, and the Falcons have repeatedly proven adept at coming up short in big spots.

2.) Desperation: though it might not truly be the case, it feels like the Saints are playing for their season on Thursday. Time to pull out all the stops.

3.) Depth: the Saints can materially benefit from the depth of their RB rotation this week. Because the Saints' RBs share the workload so widely, the rotation should be less impacted by the short week and ready to exploit the Falcons' soft run defense.

All signs point towards Brees playing a good game on Thursday night, which usually means good things for the Saints. Let's not give up just yet.

Don't fret. The loss to San Francisco was by no means devastating to the Saints' playoff hopes, and the season starts anew in just three days.