Week 11, Saints at Raiders: Can't You Hear Me Knocking? 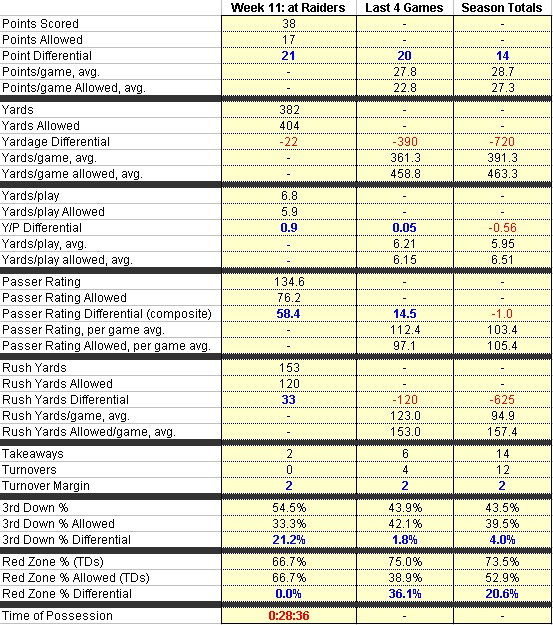 CAN'T YOU HEAR ME KNOCKING?

Who’s the hottest team in the NFC?

If you guessed the Saints, winners of five of their last six and three straight, then you’d be right.

All of a sudden, at 5-5, with a head of billowing steam, an emerging identity, and a reinvigorated purpose, the Saints have arrived, just in the nick of time, to kick in the back door of a party nobody wants them attending.

Just when we were ready to shovel dirt on this thing after the debacle in Denver, the Saints have reeled off three quality wins to claw back to .500 and, equally important, climb one game back of a wildcard spot with six games to play. Seattle, Minnesota, and Tampa Bay sit at 6-4, with the Saints lurking dangerously in the shadows at 5-5.

This thing’s just getting started.

Hear me prowlin
Im gonna take you down
Hear me growlin ...

In four weeks, Joe Vitt has transformed a largely tentative, passive team—one marked by an unsightly, delicate finesse—and infused it with a purposeful, salty disdain.

Absent is the rudderless wandering for identity and adjustments, and present is a clear-minded, physical philosophy.

We all realize that Vitt can’t replicate Sean Payton’s quick-mindedness and innovative scheming. But Vitt has been every bit Payton's equal when it comes to leading the team, in providing them with an attitude and an intensity. Further, the stage isn’t too big for him. Right now, Vitt's presence alone counts for a lot.

His players have responded accordingly, and the results speak for themselves.

Maybe I’m just seeing things, but there’s a definitive attitude shift, one familiar with Payton’s presence: a swagger, a defiance, a willfulness, an overwhelming confidence. Vitt’s bestowed it on the team just like Payton did, and it is infectious.

That mindset has manifested itself in a running game that’s produced 140+ yards in three consecutive games, in a defense that’s turning the ball over and pressuring the QB with more regularity, and in a team that’s won three straight by an average margin of 13 points.

Mark Ingram looks, more or less, better than he ever has. It might have taken Ingram a season and a half, but the light's been turned on. Much like CJ Spiller in Buffalo who wallowed for a season-and-a-half, underwhelming and battling the “bust” label before breaking out, Ingram appears to be blooming late and proving his worth.

With Ingram’s development and Chris Ivory’s ascendance—not to mention the presence of PT, Sproles, and Cadet—the Saints are in possession of an unfathomably deep and talented backfield, one capable of carrying the offense if need be. The runningbacks' involvement has shifted from a Sproles/PT-centered model, one reliant on draws, screens, tosses, and misdirections, and has been re-engineered as a more traditional power rushing attack featuring Ivory and Ingram. Sledge and Dredge, if you will.

This defining physical element, combined with the well-established primacy of the Saints’ passing game, has vaulted the Saints right back into contention. It's not exactly the nuclear offense of 2011, but it's come together pretty damn well at this point. 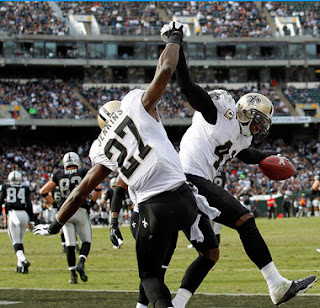 The defense, too, hasn't been bereft of a worthy contribution of its own recently.

Where's this coming from?

I don't really know, but having Vilma back on the field seems to be making a positive difference.

If it's only for his ability to properly organize the defense and check into audibles, then that's an enormous benefit.

Just being in the right set/formation is, you know, really important.

Whether this will continue for the remainder of the season is anybody's guess, but we might be on the cusp of witnessing an upward trajectory in Jenkins' career.

After starting 0-4, it would have been a lost cause for most other teams. But Drew Brees and the Saints aren't a team that convention can quickly shoehorn into futility, and the 5-1 stretch has both provided some hope and illuminated the Saints' talent and resolve.

They’ve rattled off winning streaks—consistently—during the past three seasons, and it’s happening again now. Will they sustain it?

While the pundits discount the Saints’ chances and focus on how difficult their upcoming schedule is—and sure, it is—they all miss the larger point that it’s the Saints who are now presenting the difficult matchups.

We’ve all paid close attention to the Saints' recent winning trends. Do you really think the Saints, right now, are anything less than confident that they’re winning the next game on the schedule?

Maybe that’s what it will take to really set this fucker ablaze and put the league on notice: exacting some much-needed revenge on the grating 49ers, the NFC’s self-appointed, tough-guy contender.

If the Saints really are going to kick down that door, if we’re really going all storybook with it this year, then a statement win against San Francisco is next on the docket.