Week 10, Falcons at Saints: No Sympathy for the Devil 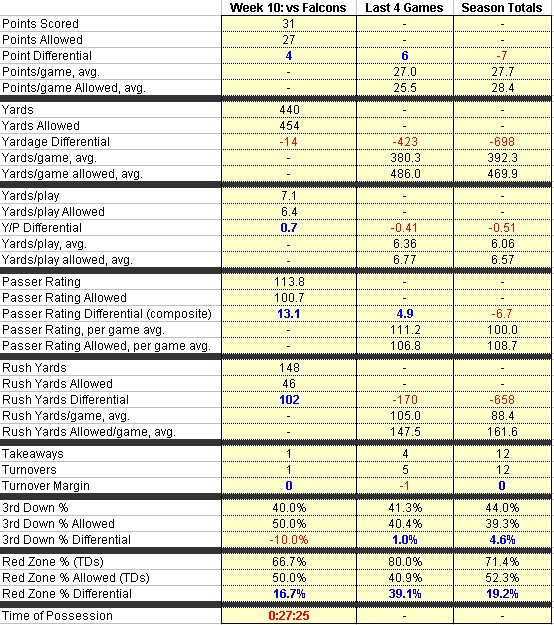 NO SYMPATHY FOR THE DEVIL 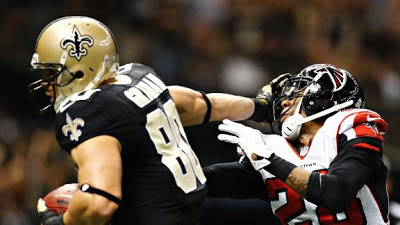 You want to know the difference between the present-day Falcons and Saints?

Matt Ryan has a career-best day and the Falcons lose.

When Brees has a career day? The Saints beat the NFL's model franchise by three touchdowns.

Nowhere is the dichotomy between the two organizations more indicative than at the quarterback position. We've seen it for the past several seasons, and we saw it again yesterday.

Even when Ryan's at his best, it's still not good enough.

Try as the Falcons might to convince themselves they've "made the leap" (or whatever), the reality is that they're a lot like the Hasselbeck-era Seahawks. They're good enough to get it done against inferior competition, but not quite tough enough to win when it really matters.

When you strip away everything else, Matt Ryan's on the path to being the Bobby Hebert to Drew Brees' Joe Montana. Until Falcons' fans grasp and accept this, they'll continue to bear the torturous brunt of coulda-woulda-shoulda.

We've been there already. They might be wise to heed the precedent. Deep down Falcons' fans probably realize this, as difficult as it might be to admit.

Come on, now. If there was ever a time for the Falcons to solve the Saints' riddle, to heal the lingering wounds of repeated beatings past, yesterday was the day. An 8-0 Falcons' "juggernaut" facing their hamstrung and coachless division rival; benefiting from a career day from their QB; jumping out to a 10-0 lead in the first six minutes; and yet still ... They. Just. Couldn't. Do. It.

What else can you ask for, for god's sake?

While we're at it, let's go ahead and get this out of the way: we need to stop calling this a rivalry. It requires another name. "Rivalry" implies something other than the consistent losing ways the Falcons have exhibited in this series. For the past six-and-a-half seasons, it's been utter domination by the Saints.

Had it not been for Garrett Hartley boning a 29-yard FG in overtime in 2010, the Falcons would have one lone, sad little victory to show for their efforts in this "rivalry" since Payton arrived.

The funny thing is that the Saints haven't consistently dominated another team so completely, ever. The fact that it's the Falcons, and that one team has aligned itself among the NFL's elite, while the other desperately attempts to convince itself it will get there, makes the end results all the more resplendent.

Imitation only gets you so far.

The Falcons can say it all they want, they can feign it as convincingly as possible, but until they topple the Saints, until they emerge from the NFC, and until they lift the Lombardi, they'll be nothing more than striving, second-rate wannabes.

In the meantime? We (still) make the rules. 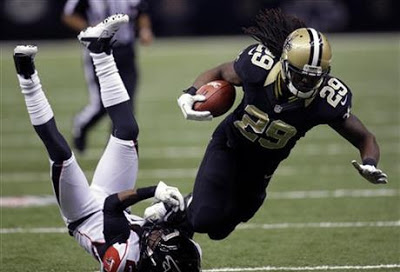 I don't know if Aaron Kromer will eventually be an NFL head coach or not.

But if not, it won't just be because he guided the Saints to a 2-4 record in the six games he coached.

It will be because he was too stubborn or too shortsighted to play Chris Ivory.

That Kromer would overlook this proven talent, and further forgo Ivory's tenacity--a missing element that begged for inclusion--won't go unnoticed when it comes to Kromer's future prospects as a head coach.

The fact that Kromer coordinates the running game makes it all the more glaringly faulty.

What Ivory provides is an ingredient vital to the Saints' optimal, winning offensive identity: a physical, bruising rushing presence. It was there in 2006 with Deuce, in 2009 with Mike "PUT ON THE CLEATS!" Bell, and with Ingram/Ivory in 2011. When Ingram proved incapable of providing it in the first few games, Kromer was decidedly slow on the uptake.

Failure to make proper adjustments in the NFL often results in plain, old failure, and Kromer's refusal to play Ivory might (unfortunately) be the legacy of his six-game stint.

With Ivory these past two games, the Saints' offense has unleashed the added dimension that's been integral to their success under Payton.

We can all debate the merits of balance--or ponder what that term even means in relation to the Saints--but the truth is that when the Saints run the ball effectively, when they merge rushing purpose with passing finesse, they are an offense unstoppable. At this point, what more evidence do we need?

Further, what we might be witnessing under Joe Vitt is an offensive identity modestly in transition, at least for this season. With the embarrassingly rich collection of talented RBs the Saints possess, it would be neglectful (or just dumb) to limit their involvement and the matchup quagmires they present.

If that means figuring out how to distribute the ball among four RBs, then I'm sure Brees and Carmichael are more than capable. If it means that Mark Ingram feels threatened by Ivory's presence, and that he'll continue to play as well as he has recently, then something worthwhile is underway.

If it means a handful fewer targets for JG80 Jimmy Graham, and perhaps more subsequent single coverage, then maybe that's a good thing. If it means Joe Morgan's deep speed will be a distant concern for opposing defenses, then the Saints' offense will be in better shape.

Regardless, what we can all agree on is that the Saints are a better team with Ivory's physical presence, and a more complete offense with the RBs involved in the game. For the first time this season, the Saints outrushed their opponent and for the second consecutive game, they've rushed for 140+ yards.

With Vitt settling in for the final seven games, the offense just might be onto something.

As of today, the Saints are 1.5 games back of the last wildcard spot with seven games to play. After an 0-4 start, just being in the conversation is good enough. Let's leave it at that for right now.

Not only is it much too early to worry with the future possibilities, it would be criminal to not spend the week enjoying this win and reveling in the continued dominance.

Good times never seemed so good.
Posted by RNG at 7:57 AM