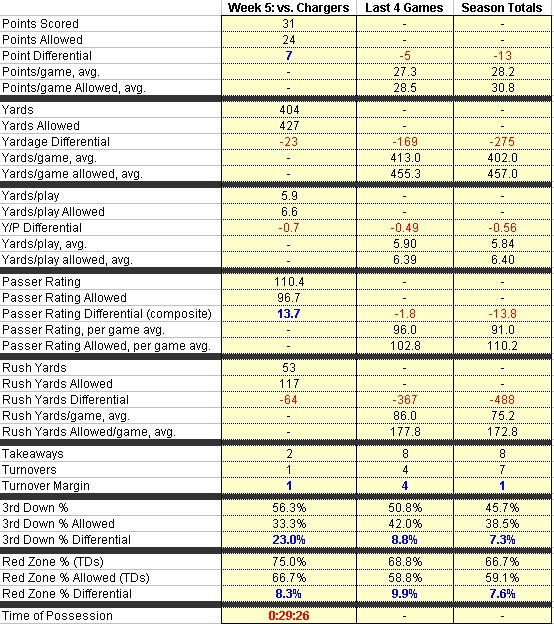 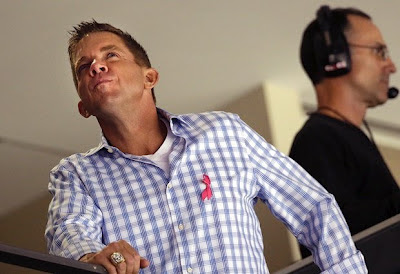 For a second there, it looked like the 2012 season was officially circling the drain.

With Sean Payton agonizingly and helplessly watching the game fall apart from the late second quarter to the early third, a gift suddenly appeared to alter the game's course: a lone penalty flag.

That flag allowed the Saints to avoid what seemed like their grisly, inevitable destiny both on Sunday night and, perhaps, the season.

When Melvin Ingram hit Brees in the face, thus negating a Chargers' defensive TD that would've put the Saints in a 31-14 hole, the Saints had renewed hope.

They didn't make it easy; that's for damn sure. But they got there. And 1-4 headed into the bye instead of a hopeless 0-5 makes a world of difference right now.

Remote though it may be, there's still hope lingering. With the way last night ended, you'd have thought the Saints won the NFC Championship. That's how monumentally collective a reprieve from grief a victory finally delivered.

Though it goes without saying, it's been a long god damn seven months for the Saints and their fans.

Last night, even if only temporarily, a little bit of order was restored: some records broken (Brees and Colston); a raucous Dome crowd; Sean Payton, Mickey Loomis, and Joe Vitt in the building; and a much-needed win.

I think we all realize by now that nothing is coming easily this year, but that doesn't mean we can't enjoy this win for the next two weeks. Maybe the Saints can build on it, and rattle off a winning streak. It's not out of the question. Though circumstances are wildly different now, the Saints have unleashed winning streaks of 13 games ('09), six games ('10), and nine games ('11) during the past three years.

Objectively, that seems like a much bigger stretch this season. But you know what? I bet the players and the coaches believe it can happen. So let's see what they do going forward. And instead of immediately looking ahead and seeing what's to come, let's take some time to enjoy this win. They might be few and far between this season.

If there's one thing more annoying than the Saints' refusal to run the ball, it's the stubborn belief that "balance" is not all that important.

I'm not talking about a 50/50 split between running and passing, but it can't continue to be the lopsided 71/29 proposition it's been this season. That is absurd, and it's unsustainable.

The Saints are never going to consistently win being a partly one-dimensional team. An inept defense and an incomplete offense do not a winning team make. That's what the Saints were in 2007 and 2008: a passing offense and not much else. It's not a recipe for success.

I talked about this earlier in the season, but failing to develop some semblance of relative balance is weak strategy. Without the threat of balance, you're simplifying the demands on your opponents. You're allowing them to more effectively narrow your range of options, and as a result scheme more effectively.

I'll say it again: it’s not so much an effort to meet some arbitrary benchmark as it is an attempt to keep the opponent’s defensive decision-making as complex as possible.

Making it easier for your opponents is not the goal. Why do you think Brees is constantly under fire when he's throwing the ball? It's because opposing defensive coordinators can predict with a high degree of certainty that the Saints are going to throw, and thus scheme to combat that threat optimally.

Yes, the offensive line isn't as good as it's been in years past, but there's more to it than just that.

Last night, NBC showed a graphic of the Saints' passing percentages by downs. It went something like this:


That's laughable. It's so skewed, you wonder if the coaches are even aware of it. It's to the point that tendencies are straying into rote, dogmatic dependency at the expense of the greater good.

Call it whatever you want, but developing tendencies that are so glaringly transparent is the essence of poor coaching. We should all hope this will be rectified during the bye week.

And now for the defense. Just ... holy shit.

I think we can stop debating whether it's coaching, scheme, or personnel to blame. It seems obvious that this is a perfect storm of ineptitude by all three.

The only sliver of hope I see for the defense--in general--is that Martez Wilson and Junior Galette will continue to log significant snaps like they did last night. At this point, why limit their snaps because they're a liability in the run game? What difference does it make? It'd be tough to be much worse, and at least they can rush the passer.

Both of them looked promising to my bourbon-soaked eyes last night.

It's one thing that the run defense is so poor, but the pass defense isn't much better either. Through five games, the Saints are surrendering a 104.5 passer rating. For comparison, Alex Smith (yes, Alex Smith) leads the NFL with a 108.7 passer rating this year. Were it not for Matt Cassel's stinkbomb in week three, the numbers would be really ugly.

So for those scoring at home, what we have here is an historically atrocious run defense, combined the league's third-worst pass defense.

This is how your defense puts itself on pace to surrender 7,312 yards this season which, of course, would be the worst of all time. By a lot.

Like last night, we might witness the shattering of a few more all-time records before it's all said and done this season.