Week 7, Saints at Bucs: The Arrival of Big Poppa 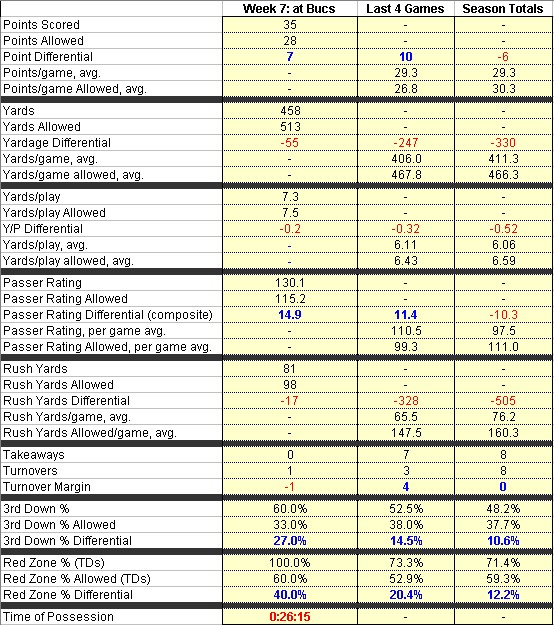 THE ARRIVAL OF BIG POPPA

You know what was encouraging? Yesterday's game looked a lot like 2011, and the seasonal timing coincides similarly to the beginning of last season's nine-game winning streak.

There is hope yet.

The best news was that for a large part of the game, the 2011 offense returned: getting down two scores, and then rattling off 28 consecutive points in a blinding flurry of Brees' wizardry. It was beautiful.

Didn't we all know what was coming at the end of the first half when the FOX cameras panned to Garrett Hartley on the sideline? Dick Stockton was droning on about the Saints moving the ball into FG range before half. And we were all like, "uh, no." This is TD range, dude.

To that point, Brees had already rendered the Bucs' secondary withered and limp, and you just knew another TD was coming.

That's how it felt last season. Every game down the stretch in 2011 was sprinkled with that magic dust of victorious inevitability, and for awhile yesterday, it felt just like that again. Remember all the close games the Saints escaped from last year? Houston, Carolina, Atlanta, Tennessee. 13-3 probably didn't come as easily as we remember it.

Yesterday was a lot like that. It was terrifying and maddening at times, but they got it done.

That's the Lance Moore I remember. That's the Joe Morgan we've been hoping for, the one who brings the nuclear option to the offense. That was the offensive line of recent yore, keeping Brees clean and allowing him to scavenge and bewilder.

It wasn't a complete game for the offense, but it was damn close. Keep that up, and the Saints will be back in this thing. Really, the only disappointing part of the offense's contribution was their inability to stomp the Bucs' throat sometime during the late third/early fourth quarters.

Now that was a Payton signature. Putting the bad guys away. Surgically and effortlessly bleeding them out before they ever saw escape as a viable hope. Yesterday? That was the little (big) piece that was missing.

Carmichael couldn't properly fit into his executioner's mask, and as the season goes along, he seems in desperate need of that devil on his shoulder in the form of Sean Payton. The Walter White to his Jesse Pinkman. 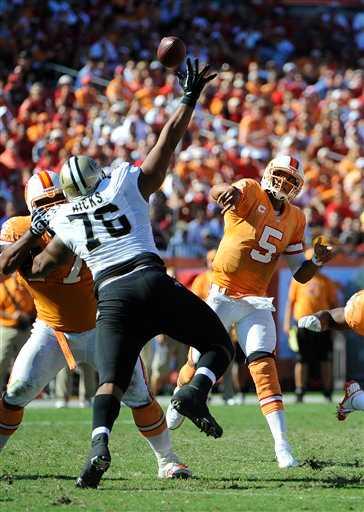 As for the defense, I think we know what we're in for by now. 513 yards? 7.5 yards per play? Josh Freeman dusting off his Warren Moon circa-1990 form?

Save for a handful of plays here and there, it hasn't gotten any better by and large.

There was a moment of clarity with Spagnuolo in that game, a stupid little metaphor that seemed revelatory: Spags wandering the sidelines, squinting into the sun's oppressive glare, his reddened face relentlessly pummeled by the heat.

Yet there were no sunglasses, no hat, no visor. Nothing. Just butt naked vulnerability. It seemed fitting.

For all his flaws, bad angles, and generally chaotic style, Malcolm Jenkins significantly impacted the game with just one play, all on sheer effort.

Along with Joe Morgan's mindbogglingly rewatchable TD reception, we very likely got the two signature plays of the Saints' 2012 season yesterday.

We can bitch and moan all we want, but these guys care. And giving up isn't on the menu of options. That counts for something. Jenkins might never evolve into the player I've hoped he'd become, but he has a knack for making big plays periodically. His play vacillates wildly between the extremes, and if the coaches can help him locate a middle ground, he might finally get there.

Lastly, and most important, let's give an affirmative nod to Akiem "Big Poppa" Hicks. :yes:

throw your hands in the ay-er ... if yous a true playa

For all the memorable plays in yesterday's game, I'll probably remember it for Akiem Hicks' arrival as a big time player.

It's been a long while, but all appearances point to Hicks being a true standout. This dude is going to be a monster, and as has been pointed out numerous places, he made his mark on the goal line stand yesterday. It was the impressive, defining moment of the infantile stage of his pro career.

Since preseason, virtually every time Hicks has been given a chance, he's made the most of it. When all the pundits say he's "raw," they're right but they're missing the bigger point. You don't keep a talented, impactful player off the field because he hasn't yet neared his immense ceiling. Anybody remember Jimmy Graham in 2010? Into the fire you go, young man.

They can't keep Hicks off the field any longer. The quicker he develops, the better the defense will be. The same philosophy holds true for Martez Wilson and Junior Gallette.

In the meantime, if the defense continues to push the envelope of futility, at least they're developing the young players who'll be front and center in the next few years.

And maybe, just maybe, they'll help the Saints' defense turn it around in time to salvage the 2012 season.