Week 4, Packers at Saints: A Step Behind 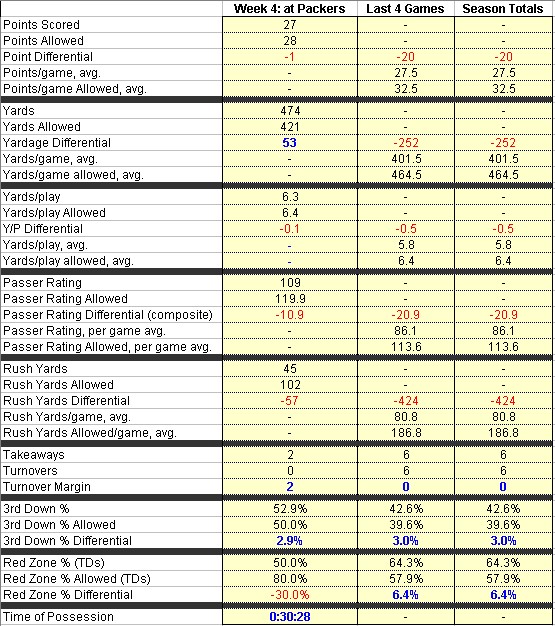 In case it escaped your notice, the Saints have already lost more regular season games than they did in 2011. Just like that. After four weeks, the season is officially on life support if it wasn't already.
The weird thing is that the Saints have lost by only 8, 8, 3, and 1 point(s). No matter how sloppily and disjointed they've consistently played, they've been in every game at some point in the 4th quarter.

They may have played poorly, but they haven't given up. Nor should we. 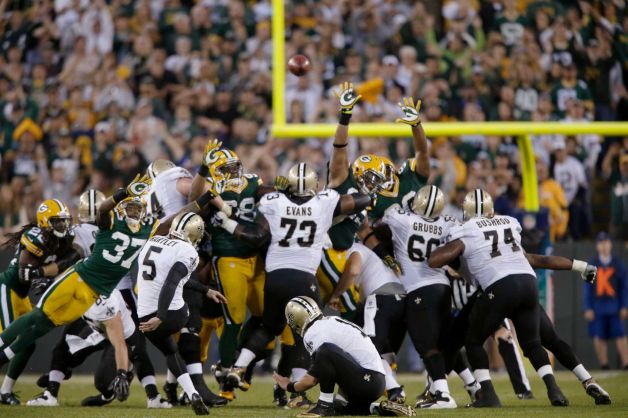 Because the games have all been within reach does not discount the fact that the Saints have thoroughly earned their 0-4 record. They have. It just goes to show what a lot of talent and a coaching void will get you: not very much.

There's still a lot missing and yet there were plenty of signs of normalcy--the good kind of "normal"--on Sunday. It wasn't enough, obviously, but it seemed like a familiar team we were watching. During the three weeks prior, it wasn't just that the Saints were losing, but that they were suddenly unrecognizable.

Against the Packers, it felt better and it was a thoroughly enjoyable watch. The first three games were excruciating and inevitably doomed in their own ways. Yesterday was exceptionally entertaining and I didn't feel that pall of death hovering. Until I did. But by then, it was too late to ruin the day. Mostly, it was a fun game to watch.

For this season, that might have to suffice for the positivity.

Was it not fantastic to watch Graham Harrell tool out and botch that exchange? Was it not even more perfectly righteous when Jenkins recovered the fumble, after having knocked Rodgers from the game? You could almost hear the legions of mouthbreathing haters screaming all the predictable shit about the "evil Saints" at that moment. And then Joe Morgan soon turning the fumble recovery into a stellar 80-yard TD, and swinging the game in the Saints' favor?

It was a decidedly brilliant "we make the rules, pal" moment.

That sequence had it all: comedy, excitement, hopefulness, efficiency. More important, it was a glimpse of the familiar winning team we've come to know these past years. Even if it was only a brief moment, it was a reminder they're still in there somewhere. If those are the slivers of sustenance we have to subsist on this season, then so be it.

Because unfortunately it's going to take their maestro to elicit that greatness on a consistent basis, and that's not happening any time soon. Unless, of course, Joe Horn is onto something.

After four weeks, it's clear where Payton's absence is most recognizable: gameplanning, adjustments, and self-scouting. As just one example, consider the immense impact Payton might have on Spagnuolo's defensive schemes through the self-scouting process. Would it not be incredibly beneficial for Payton, widely considered the league's preeminent offensive mind, to illustrate where Spags' defense is weak? And how he would go about exploiting those weaknesses?

Think of the advantage in that, week in and week out. And think of how that might mask some of the defense's many shortcomings. And that's just one example of where Payton's absence is noticeable.

That's the thing with Payton: he's always been a step ahead; he's always had a smart plan and a bevy of adjustments at the ready. He's schemed to consistently keep opponents on their heels, to induce them into making an adjustment he's already planned for. Without him, it's the Saints who have consistently been on their heels. Instead of making adjustments after a few quarters, it took the Saints three f*cking games to do so.

These days, it's the opponents who are a step ahead and the Saints a step behind. That's how you bumble your way to 0-4, having lost each game by an average of five points doing mindlessly stupid shit.

I feel clinically insane for ever having misunderstood the impact of Payton's absence.

Teams don't win solely on talent, and I have no idea why I thought the Saints could. Look at San Diego these past several years. Or Philadelphia. Or Dallas.

There's so much more to it, and now we've got a front row seat to watch just how far talent alone will take you. To this point, that would be "not very far."

It's one thing to endure losses when the team is bad. But it's another kind of (new) pain to watch a talented team constantly fall short. At least it's something new, I guess.

Postscript
In the first half yesterday, I found myself morbidly fascinated with the defense's spectacular helplessness. It was an exercise in rubbernecking, and I was almost giddy for the defense to get back on the field. If it was going to be bad, I was excited to see just how bad. For the most part, they did not disappoint in their futility.

The defense is perilously close to being historically inept. Last year we were treated to a kindler, gentler, rewarding display of historic achievement by the offense.

This year, the script has been flipped. History's drunken cousin has rolled into town, looking to make a mark of his own. We might as well get on board and have some fun with it.
Posted by RNG at 8:21 AM