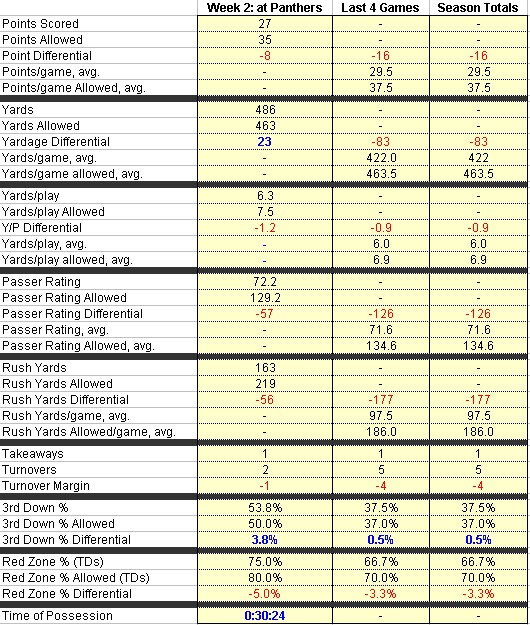 ON BORROWED TIME
Clearly, something is amiss. 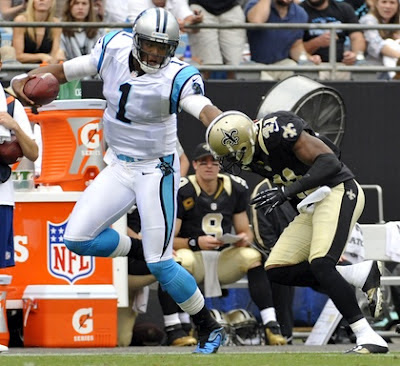 Mostly, it's an inability to stop the opposing QB. Even remotely.

If you want to identify why "0-2" is twisting its rusty, jagged blade into the small of your back while you writhe hopelessly, then direct your foggy gazes accordingly.

For context, 158.3 is a perfect passer rating and thus far in 2012, RG3 and Cam Newton have been damn near perfect against the Saints in consecutive games.

In eight quarters played, the Saints' defense has allowed opposing QBs to perform at such an extremely high level that the outcome of each game shouldn't have been as close as each has even been.

How many times over the past five seasons have you heard some random talking head say "It's a passing league now."? When a QB does whatever he wants, whenever he wants to, opposing teams have virtually no chance of winning. What's worse? The Saints' defense allowed Cam Newton to rush for 71 yards and Robert Griffin, III 42 yards in addition to their pristine passing performances. Winning can't be much more difficult when that's what you're up against.

Forget about Sean Payton or Aaron Kromer or a clearly deficient WRs corps or a weakened offensive line or a rattled Brees or a hobbled Colston. None of that is affecting Spagnuolo's flaccid, gauzy defense through two weeks. If defending the opponent's QB doesn't improve markedly, then the Saints are living on borrowed time whether Sean Payton is on the sideline or not.

Sure there are holes in other places. But they're minor in comparison, and not nearly as injurious to the Saints' chances of winning. Payton's presence hasn't significantly altered the performance of the defense in year's past, so it seems disingenuous and lazy to lay the blame there now.

It's simple: when you're incapable of stopping the opponent's QB, even in the most cursory ways, your chance of winning plummets. There's no way around it.

Nowhere has this inability been more pronounced than in the red zone. In two games, the Saints have allowed the Redskins and the Panthers to score TDs 70% of the time when they get inside the Saints' 20. That stat alone is death. Coming off a season in which the Saints allowed a near league-worst 62% TDs in the red zone, the defense has continued the trend of being more openly permissive than a Deadwood brothel.

If the Saints are intent on lifting the damp, rank disquietude lingering over the team right now, then functionally defending opposing QBs is a good place to start.

I previously mentioned this, but replacing Robert Meachem wasn't a simple plug-and-play proposition. Meachem is a borderline #1 WR and the Saints were fortunate to have him manning the 4th WR spot. The resulting drop-off has been noticeable.

So much for "balance," right? Shows what some of us lowly bloggers know. 163 yards rushing (6 yards per) plus 323 through the air, all for naught.

Update: 24 games without an INT for Saints' safeties. Add to that yet another easy INT dropped-this time by CB Patrick Robinson--and the Saints' secondary couldn't look any more feeble.

Cameron Jordan has been one of the lone bright spots on the defense. Following up a stellar week one performance, Jordan again looked worthy of his high draft status against Carolina.

Pierre Thomas continues to be a reliable, indefatigable playmaker. An all-time Saint. It's apparent that PT has modeled himself after Deuce, and his consistency, toughness, and positive attitude speak to that.

Let's be hopeful for a week 3 breakthrough. Keep the faith. It's a long season.