Each week this season, I'll provide a quick recap of relevant stats and a brief commentary from each game. At four-week intervals, I'll provide a more comprehensive breakdown of Saints' stats and measure how the team ranks league-wide over a variety of categories.

If you have feedback or requests for this weekly spot, please suggest those in the comments section.

With that said, here goes. 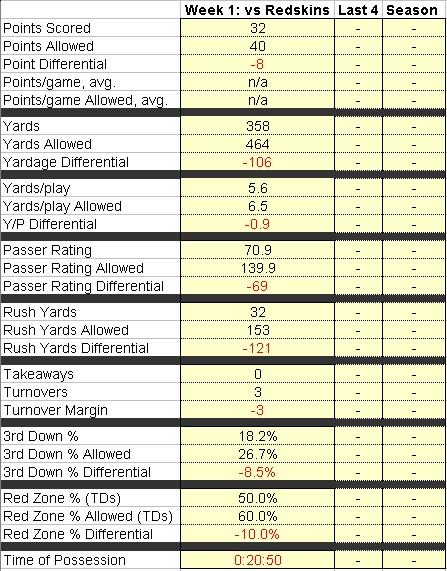 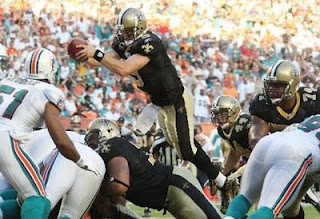 It all came to a head when, down 30-14 late in the third quarter, the Saints sent in Garrett Hartley to attempt a FG from the Redskins' three yard line on 4th and goal. Guh.

It might or might not have been a theoretically sound decision, but it was damn sure uninspiring nonetheless.

On a day of listless performances, this decision reflected the whimpering tenor and passivity with which the Saints played all day.

At the commercial break, I couldn't help but think of the Dolphins' game in 2009. As I'm sure you recall, Coach Payton eschewed a safe FG attempt right before halftime, and instead opted to let Brees sneak it from the one-yard line. When the Saints scored a TD as a result, it helped spark a rally that ultimately became a defining point for the Saints' championship season. Equally important, it further entrenched a mindset of aggression and confidence that has become a key organizational tenet over the years.

"Taking the points" vs. Miami in 2009 might have been the safe, conventional choice with an entire half to play. But in realizing there was perhaps some hidden negative value in embracing timidity, Payton did more than simply gain an additional four points. And, in general, the Saints have been better because of that mindset of aggressive decision-making.

On Sunday, the decision to kick the FG was a questionable departure from the norm; and aside from everything else that happened yesterday, it was the one sequence that was most concerning. In recent years, we've seen the offensive line fail; we've seen the run game disappear; we've seen the defense give up big plays and fail to tackle. But we've never seen timid surrender from the coaches.

One can only hope that Kromer's choice in that moment was a temporary miscalculation by a rookie head coach, and not a portending signal of ineffectual leadership.

Either way, it was a shortcoming on a day filled with dispiriting moments. Moreover, it was a glaring reminder of Payton's absence crystallized in one decision.

Unfortunately, we didn't need that lone moment to remind us because the on-field evidence was suggestive of a team coached (or prepared) less than optimally.

After one week, it's easy to fall into the trap of overreaction. When you take into account the events of this offseason and combine that with the Saints playing a home game against a rookie QB, it's even easier to slip down the rabbit hole of panic. But let's play a few games before we start making any definitive claims.

The coaching will (I think) improve, and the execution from the players certainly will. Well at least on offense. They've earned the benefit of the doubt. The defense? It's anybody's guess at this point. But the early returns were not too encouraging.

Mostly, we know these things after one week:

A 52/10 pass/run ratio is unsustainable, as is a -3 turnover margin. The Saints' ten rushing attempts were their second-fewest since the 1970 merger.

A 2:1 deficit in time of possession is an indicator of disaster, and yesterday's 20:50 mark is just a few seconds off of the worst clip of the Payton era. Not good.

The glut of dumb penalties is uncharacteristic of this team. The comparisons (of the bad variety) to the Raiders will only get more obnoxious if those continue.

Let's hope the offensive line doesn't perform so atrociously every week, especially the tackles. This was a unit considered the NFL's best in 2011. Surely it wasn't all due to Carl Nicks.

Darren Sproles and Marques Colston need to get healthy. Sproles looked rusty, Colston seemed tentative, and neither appeared as sharp as normal.

A fourth WR is important, and Joe Morgan hasn't done much to impress besides run fast. With Devery being hurt (concussion?), WR depth is a lingering concern.

Jimmy Graham might be just as dominant as Calvin Johnson. The Redskins had him perfectly double-covered in the end zone in the first quarter, and he still found a way to grab the ball.

As much as I think he can be great, Mark Ingram continues to look unremarkable in limited action. Maybe I'm scarred by the inconsistency of the Reggie Bush experience. We'll see. I still have hope.

At some point, the defense needs to learn how to tackle and, periodically, secure an interception. By my count, Saints' safeties haven't intercepted a pass in 23 games.

The pass rush continues to be non-existent. I have high hopes for Junior Galette becoming a reliable pass rusher this year, but he didn't see too much action yesterday. So what do I know?

The scab refs, while not to blame for the loss, were mostly bad.