By The Numbers: Inside Domes and Out

Since 2006, the beginning of the Payton-Brees era in New Orleans, the Saints have played 104 games in the regular and post seasons.

While it's fairly common knowledge that the Saints have been one of the NFL's best road teams under Payton, ranking third in total victories since 2006 and first since 2009, there's still conventional wisdom among pundits and in national media circles that suggests the Saints are a much different (read: worse) team on the road.

While part of that perception stems from high-profile postseason losses in difficult outdoor venues (Chicago '06, Seattle '10, San Francisco '11), it's hard to tell if that perception has any truth to it. The distinction that's often missed is in separating road games in domes from road games played outdoors.

Of the 53 road games under Payton, the Saints have played 13 of those games (~25%) in domes and have lost only three times (Indy '07, Atlanta '08, St. Louis '11). Playing in road domed environments has hardly proven difficult. But what about those other 40 games played outdoors?

First, here's a look at yards gained/allowed and points scored/allowed in dome and non dome venues under Payton: 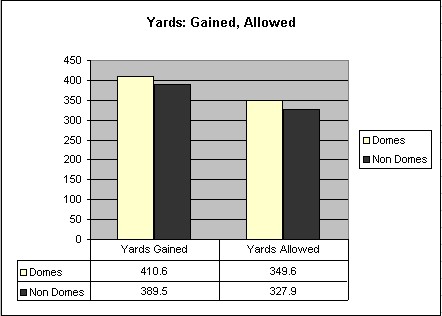 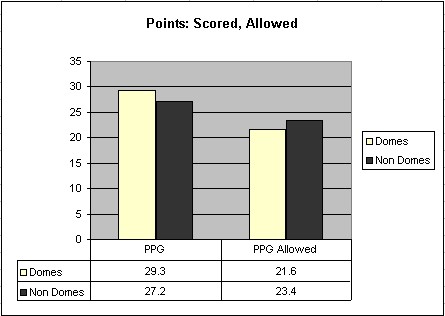 More importantly, here's a snapshot of the Saints W/L record in the two settings, along with some accompanying stats:

That's a fairly stark disparity in win percentage, and certainly indicates that the Saints aren't nearly as good outdoors as they are in a dome. I know this isn't much of a revelation, but the numbers more clearly and specifically illustrate it. I've been as guilty of this as anyone, but it seems disingenuous to state in blanket that the Saints are an elite road team. In a way it's true, but that statement needs to come with a qualification: dome game or outdoor game?

Put the Saints in a dome, whether that be in New Orleans or elsewhere, and they're probably the best team in the NFL. Outdoors, though, they're much closer to "good" than they are to "great."

Above, the stats that seem most important are turnover margin and passer rating differential ("QB Rating Diff.").

The turnover margin speaks for itself, and has been beat to death over the past several years so I'll refrain from rehashing it here. What's really surprising (or not) is that the Saints are -15 in aggregate turnover margin since 2006. The fact that they've been able to overcome that to become one of the NFL's best teams speaks volumes for their talent, coaching, and persistence.

In domes, the Saints have posted a blistering +20.6 PRD, but it falls way off  to +7.5 outdoors. Why? Mostly because of Brees being less than amazingly good and the Saints' D being anything more than mediocre. It's also fair to say that Brees' ratings, in whole, mirror the overall efficiency of an offense that operates at its peak absent random weather and field conditions.

The Saints' defense has been incredibly consistent, if not spectacularly mediocre, at defending opponents' passing attacks both indoors and out. Under Payton, opponents have posted a 83.5 passer rating in domes and an 84.6 rating outside. It's Brees' performance that has produced a bit more volatility. Take a look: 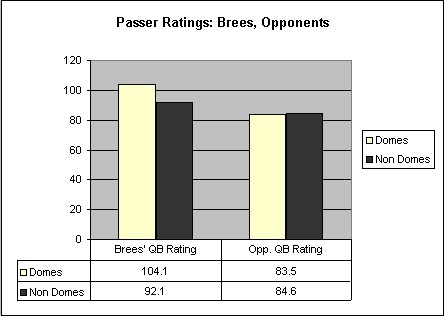 When Brees' performance is less-than-superhuman, the Saints seem to be eminently beatable and that happens more frequently when they're outdoors. Is it fair to say that the Saints are largely dependent on the performance of Brees? I think so. Groundbreaking analysis, I know.

Brees has been so good in domes, averaging a passer rating of 104.1, that the Saints have won 70% of their games by outscoring opponents by more than a touchdown per game. For better perspective, Brees' passer rating in domes equates exactly to that of Aaron Rodgers' career passer rating which ranks #1 all time.

All of this is to say what's intuitively graspable: Brees and the offense are at less than their best outdoors, not simply on the road. And because the Saints have lived and died on the merits of their offense under Payton, when the offense is at less than its best, the team is vulnerable.

Since 2009, the Saints have been a bit better outdoors (13-7, 65%). The problem is that, aside from the Super Bowl, they've lost each of the outdoor games that I would identify as the most challenging: Baltimore '10, Seattle '10 wildcard, Green Bay '11, San Francisco '11 divisional.

In those four games, they're -7 in turnover margin and their PRD is a whopping -17.1. Lastly, they've surrendered a soul-crushing average of 37.3 points in those games. So maybe not much is changing, but it's a new year so there's hope.

Will it change for the better this season?