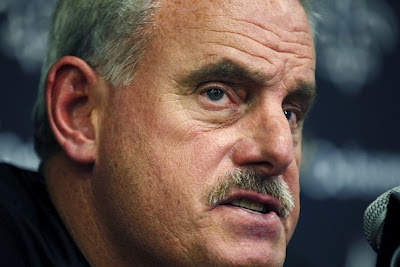 Let's be clear about one thing.

The Saints are pissed off.

(Before I continue, what follows was inspired by this post from one of my favorite Saints' blogs out there. One more disclaimer: this is going to be a bit profane.)

Don't buy for one second the Brees-inspired, professionally-crafted PR statements of equinamity and
repose from the Saints from here on out.

It sure as shit ain't "business as usual" this year. Nobody's buying that one.

Far from it. All those talking points are just a transparent front to buy the team some goodwill in the legit media while they plot revenge.

This is a team on a mission to destroy everyone in its unforgiving wake, and moreover, defiantly scorch Roger Goodell right in his bloated, smug, preening face. Full measures. If there was ever a time to have Sean Payton in the mix, this would be it. But because he's the main casualty here, the principle motive rings even clearer and "win one for the Gipper" just got a salty, South Louisiana reboot. Here we come to get you.

Yes, this season has the potential for unprecedented glory. Take it in and revel in it for all it's worth, because these are the circumstances from which indelible memories are forged. It's all unfolding right now.

Forget 2006 and 2009. They are cemented in the pantheons and are unchallengeable. This is different.

Like '06, this is an opportunity for a unique, once-in-a-lifetime achievement. If what has transpired weren't so incredibly motivating and unfinished, it would be fucking tragic. Roger Goodell and BountyGate be damned.

Just remember that this is a chance to make history. A unique opportunity to stand alone. To deliver cold revenge. To sear a dynastic legend in blistering, indomitable fashion on home soil during the modern rebirth of New Orleans. That's all that matters now.

This is a franchise that was blindsided, upended, and railroaded by a scheming set of billionaires intent on optimizing their P/L statements at the expense of the Saints, their fans, and the city of New Orleans.

Don't let anyone tell you differently.

Fall guys color the course of human history, and the Saints are just another in a long line of patsies sacrificed in the name of power and money. But don't get it confused this time. This is a patsy that ultimately has a say in the matter.

The last chapter of this story isn't quite written yet.

This is a team with a QB who ranks among the best ever, yet continually falls short of being recognized as such. This is a franchise that is perhaps most well-renowned for paper bags. This is a fanbase, a city, and a team that was, by and large, left for dead nearly seven years ago. Dead.

And guess what? We're still here. Alive and prospering. 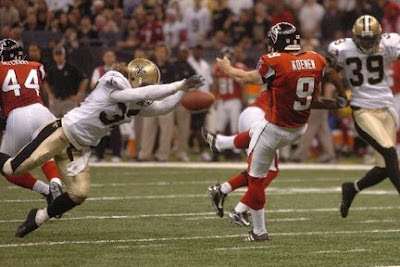 If the world at-large thinks that a little persecution and scarlet-lettering is going to deter a city, a team, and a leader who have marked their achievements through the rites of adversity, then they are all sorely mistaken.

You think it's coincidence that Joe Vitt and a host of Saints' players testified under oath on Jonathan Vilma's behalf yesterday?

It was not just a revelation of the real truth, but more importantly a statement of intent. An affirmation of collective purpose.

This is a highly-talented, veteran team galvanized by cause, driven by the shortcomings of '11, and intent
on making right the injustices of BountyGate. Instead of focusing on why the Saints were persecuted, just think about how sweet it will be when Roger Goodell is forced to show up in the Dome--under a deafening chorus of deserved hate--and hand the Lombardi Trophy to Joe Vitt, Drew Brees, and Tom Benson.

Don't kid yourself, it's in play.

And most glorious will it be.

Buckle up and enjoy the ride because it's just getting started.