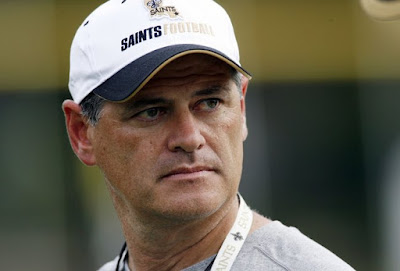 It wouldn't be out of the ordinary. But I don't see how Mickey Loomis survives this "bounty" scandal as Saints' GM.
In fact, I'd be surprised if Loomis was still employed by the Saints a week from now. This is a story made ugly nationally, and for these transgressions there is always collateral damage.
Enter Mickey Loomis.

At a crucial juncture in the NFL's drive towards player safety and at a time where lawsuits are mounting against the league for a variety of game-induced health maladies, the Saints were implicated in the sanctioning and rewarding violence towards opponents through an established, administered team protocol. The timing could not have been worse.

The public divulging of what appears to reflect an institutionalization of violence--a maintenance of an internal culture that supposedly runs counter to both the spirit of the game and to league mandates--is not something the NFL will take lightly.

Instead, this will certainly be another in a line of tipping points leading to a safer, less violent brand of football strictly regulated by the league, with a dearth of leniency for its transgressors. The Saints will stand to be made example of, and the league will surely send a loud, ominous message.

The meting out of punishment--fines, suspensions, forfeiture of draft choices--won't simply be disbursed externally from the league offices, but also driven from within the Saints' organization as a recognition, admission, and contrition for their wrongdoings.

When the league upbraids the Saints with its own brand of paternal gravitas, citing conduct that poses a “serious threat to the integrity of the game,” the onus will be on Tom Benson to recognize that, aside from the fact that his directives were plainly ignored by a high-ranking employee, his business interests are threatened by the revelation of this scandal. Mr. Benson will be forced to send his own message and re-establish who's in fact in charge in New Orleans.


Not only will Benson feel vulnerable for employing a consigliere (Loomis) who failed to follow orders, in and of itself a threat to the profitability of the enterprise, he will also risk alienating segments of consumers and advertisers who will be less than enchanted by the totality of this event. In business, every piece of the revenue stream counts no matter how marginal. 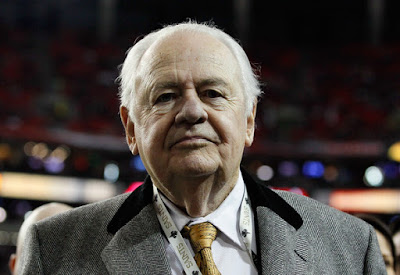 It's been established that Loomis misrepresented the truth (lied) to the league about the bounty scandal.
Further, Loomis failed to follow Tom Benson's orders to cease the operation of the program once Benson learned of its existence.
When you combine Loomis' intransigence with his repeated mendacity, you find yourself not with a feckless patsy but with an empowered, willing participant complicit in wrongdoing. Repeatedly.
This is not a grey area. It stretches the imagination to think that Loomis can survive this ordeal in light of his failure to heed both the warnings of the league and the directives of his boss.

After all, the Saints haven't exactly been clean under Loomis' guidance. The recent Vicodin scandal cast a cloud over the Saints' Super Bowl celebrations and identified Loomis as directing a cover-up in an effort to protect his coaches. This situation first called into question Loomis' decision-making and suggested the notion that Loomis' motives and machinations were far from impeccable. As this case was sent to arbitration, further details were suppressed from the public record and for a time, the event was simply a bump in the road.

Perhaps the situation revolving around Brees' contract is a microcosm of how Loomis has heretofore been handling internal issues with the team. His approach to signing Brees has been marked by a lack of urgency, a neglect of foresight, miscalculation, and most egregious of all, the underestimation of Brees' resolve.

If these are the traits that have defined the execution of the biggest no-brainer decision in the history of the team--locking up Brees to a long-term, lucrative deal--then what are we to make of issues that seemed of less significance to him?

Did Loomis consider the ongoing implementation, administration, and funding of the bounty program a non-issue or simple annoyance to be brushed off in light of other issues? Did he consider the broader implications of such a program? And why did he feel empowered to ignore the directives of the team owner? Was this an isolated incident or modus operandi?

These further developments, unfortunately, might be revelatory of a GM who is not quite the genius he's been repeatedly purported to be in Saints' circles. If nothing else, it muddles the established truths and smears the myriad successes Loomis has personally orchestrated during his tenure.

What now seems inevitable is the initial unraveling of the presently-constituted Saints' franchise.
If Loomis is unceremoniously dismissed as Saints' GM in light of the bounty scandal, his will be the first frayed thread to signal a changing of the guard in New Orleans and the precursor to a new era.
Posted by RNG at 8:26 AM