The Realities of Super Bowl Glory

I'm going to get ahead of myself in these next 600 words.

If you prefer to focus on the present, to focus on the pending "trap" or "letdown" game that looms this weekend in Minnesota, then go right ahead. But I don't want to think anymore about how this weekend's game has all the classic elements of a letdown. Instead, I want to speculate.

I'm going to (ahem) ponder the end-game: winning the Super Bowl. Will the Saints do it again this season? 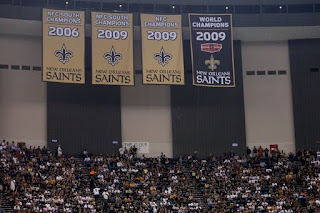 The current state of Saints' football is one of expected excellence: from players, coaches, executives, and fans.

While in the not-too-distant past, the prospect of a 10-win season and a playoff berth would be cause for mass celebration (like most everything else in New Orleans), this year's securing of a postseason invitation was met mostly by muted cheers and an air of inevitability.

Why? Because Saints' football has finally risen to the level that dictates that winning the big prize is all that counts. At least it's started to feel that way among an increasingly larger swath of the fan base. Four playoff trips in six seasons? Yawn. Two NFC Championship Games in five seasons? Standard.

But another Super Bowl win? Well, the Saints need another one if for nothing more than to validate the ever-prominent, deep-rooted belief that the Saints 2.0 are the NFL's best franchise, that they are in the dynastic throes of NFL history, and that in this golden age of football in south Louisiana, that greatness and immortality will be judged by championships only. Moral victories are a bit passe, no?

So while sentiment and expectation have wildly shifted the notions of success, consistent on-field production and winning results have been the fundaments for such aggrandized, lofty goals. Having an all-time great at QB in the midst of one of the greatest six-year stretches a QB has ever produced also forcefully contributes to the notion. Why think otherwise?

And what's most settling is that it's firmly rooted in reality. It's no longer a delusion. The Saints are in fact positioned to win another Super Bowl this year, whether they blow this game against Minnesota or not.

Of course, if you ask the all-knowing pundits and media experts, it's fait accompli that the Packers will waltz uncontested to a second consecutive Lombardi trophy. And if you listen not-so-closely, you'll hear the rattlings of "historic greatness" and "best of all time" bandied about in almost every Packers' conversation.

And guess what? At this point, maybe deservedly so. But it's a bit premature. And dismissive. Do you think that this Saints team, given an opportunity against Green Bay in the postseason, is just going to roll over and die? That they're just going to concede to some presupposed fate? That they're incapable of winning?

Nonsense. This seems like a team motivated by unfinished business.

In case you haven't noticed, this is not a group of individuals easily deterred. Instead, it's a team with the striking qualities and champion's demeanor of its quarterback: determined, prepared, confident, composed, and highly-skilled. 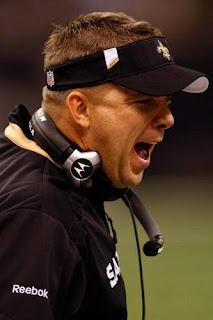 In the NFL, the meek don't inherit shit.

When I look at the current embodiment of the Saints, I see a better, more complete group than the '09 team. I see a team with a proven belief system--now innate and complete--that espouses a yeoman's work ethic and a champion's heart. I see a team with an indefatigable, beaming focus. I see a team fully capable of winning the Super Bowl, and just as good as any other team in the NFL. I see the lore of a champion's tale being told.

Call me crazy, call me blinded by loyalties, call me irrational, call me incapable of objectivity. Those things are all true. But those qualities of mine don't undermine the plausibility of the premise.

There are roughly two months left in the NFL season. Will the Saints ascend Lombardi's mountain and reach its summit again? Here's an affirmative nod for once again looking down from that champion's peak.
Posted by RNG at 11:20 AM